A year after Typhoon No. 15, Chiba residents still struggling 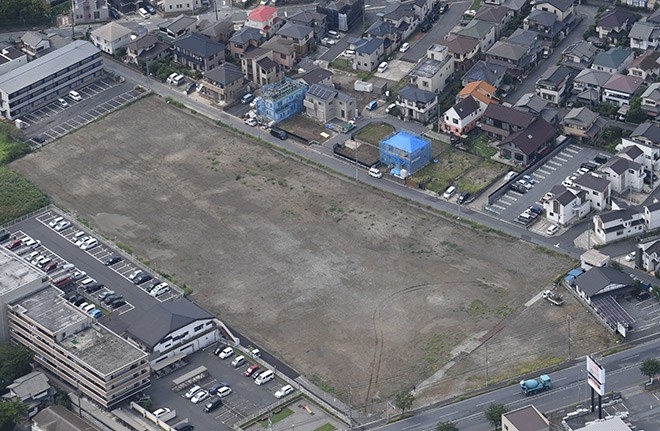 An empty lot where a driving range once stood in Ichihara, Chiba Prefecture, on Sept. 5. Powerful Typhoon No. 15 in September 2019 sent iron posts and netting flying into nearby homes, leaving many seriously damaged. (Reina Kitamura)

ICHIHARA, Chiba Prefecture--This city ravaged by deadly Typhoon No. 15 exactly a year ago is still groping to recover.

In the early hours of Sept. 9, 2019, violent winds tore through the Boso Peninsula in Chiba Prefecture, damaging about 81,000 homes.

Destruction in one area was immense after netting and support posts from a golf driving range were ripped out of the ground and hurled into nearby homes.

The 13 iron support posts, ranging from 30 to 41 meters in height, flew into two dozen houses, half of which were damaged beyond repair. Ten had to be dismantled at public expense.

The driving range, shuttered by the operator, is now an empty lot.

Most of the destroyed homes have been bulldozed as well, and three ones are now under construction.

But many more locals who dream of taking that step are still wondering when they can begin life anew since the novel coronavirus pandemic delayed settlement negotiations between residents and the golf facility operator.

“The past year seems like it went by in a heartbeat,” said a man in his 60s whose two-story home was destroyed by the collapsed posts. “I want to build a new house as soon as possible, but it’s unlikely.”

The fallen posts were left untouched for about two months afterward, the man said. As a result, the roof was destroyed and rain soaked the walls and floors.

His fire insurance covered damage to the house. But other damages running into several million yen, such as ruined furniture and the repair costs for a collapsed garage, were not covered.

For now, he lives with his wife and son in a house he rents in the city.

The driving range operator stated in November 2019 that the company would sell the land to compensate the affected residents.

But the alternative dispute resolution procedure, set up for residents to negotiate compensation, has been suspended for months due to the pandemic.

The man said he was told in late August that the company is only willing to pay less than half of what he expected.

“I want to move on and start a new life, but it’s hard to put the (disaster) behind me until the amount of compensation is decided,” the man said.

The collapsed iron posts also severed the friendly relationships many people in the neighborhood had enjoyed prior to the disaster.

Takahiro Matsuyama, 56, whose home was partially destroyed by the posts, said he used to say “Hi” to his neighbors every time he saw them.

But many of his neighbors, whose homes were totaled by the incident, have since left.

Matsuyama repaired his house for his family of five and still lives in the neighborhood.

He said just a “few meters made such a big difference,” in terms of the seriousness of damage.

“Our lives have changed so drastically,” he said. “I miss my neighbors very much.”