EDITORIAL: Women can only ‘shine’ in society when their rights are respected 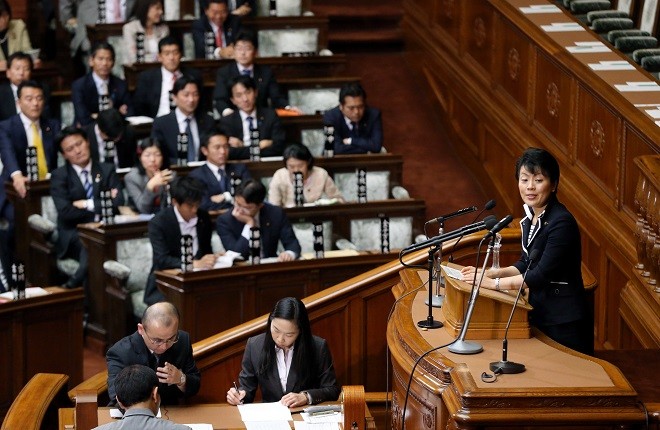 Lower House members deliberate on the Act on the Promotion of Female Participation and Career Advancement in the Workplace at a plenary session in October 2014. (Shogo Koshida)

Outgoing Prime Minister Shinzo Abe repeatedly vowed to empower women and build a society where they can “shine,” citing the initiative as a key plank of his policy agenda.

How has the picture actually changed during the seven years and eight months of his administration?

During a debate among the three candidates for the ruling Liberal Democratic Party’s presidential election to pick Abe’s successor, held Sept. 9 at the party’s headquarters in Tokyo, they all promised to take measures to support women and narrow the gender gap.

But ensuring a really in-depth, nuanced debate on this complicated policy issue requires a rigorous assessment to weigh the pluses and minuses of the Abe government’s approach.

The Abe administration’s policy measures to promote the roles of women in society were mostly focused on economic benefits. There were signs that the administration was seeking to tap the labor of women to stoke Japan’s economic growth amid the nation’s demographic decline.

Policy support to help women return to work or start their own businesses after years of child rearing and a revision to the law to extend the legally required period of child care leave have encouraged more women to work. Measures to reduce the number of children on waiting lists for child care centers have also contributed to increasing the number of women in the workforce, which last year surpassed 30 million for the first time.

The ratio of working women has risen from around 60 percent to more than 70 percent in the past eight years.

But a majority of working women are in part-time or other non-regular positions. As the economy has been battered by the new coronavirus pandemic, these non-regular female workers have been the first to lose their jobs. Women accounted for more than 70 percent of the year-on-year decline of 970,000 non-regular workers in April.

The law to promote the roles of women enacted five years ago requires large companies and local governments to set numerical targets for hiring women. It was a welcome policy move to urge large employers to make specific action plans to hire more women.

But the government has scuttled its policy goal of raising the ratio of women in leadership positions to around 30 percent by 2020. It has pushed back the target year with the vague phrase of “as early as possible in the 2020s.”

The gender gap is the worst in politics. Ninety percent of Japan’s Lower House seats are occupied by men, which is one of the lowest rates of women’s parliamentary representation in the world.

A new law was enacted in 2018 to urge political parties to make serious efforts to ensure that the numbers of their male and female candidates for national and local elections are mostly equal. But women constituted less than 30 percent of all the candidates for the Upper House election last year.

At the heart of this problem lies a deep-seated culture of giving less respect to the human rights of women.

Even in the past several years, the nation has been hit by revelations that point to this tradition, including those concerning sexual harassment against a female reporter by a top Finance Ministry bureaucrat and discrimination against female applicants in entrance examinations for some medical schools.

This situation reflects the fact that Japanese society has not done enough to change the traditional, stereotypical ideas about the roles of men and women.

Despite strong public support for allowing married couples to use different family names, as indicated in polls, the Abe administration has taken no action to legalize the idea, apparently out of concerns about antagonizing lawmakers and supporters who place great value on conservative views about families.

Most of the old policy challenges concerning gender equality remain to be tackled. They include the elimination of all kinds of gender disparities in everyday life, promoting more women to senior posts at companies and government organizations and building a solid social consensus on the importance of protecting the dignity of women.

The next prime minister should take on the policy mission of promoting gender equality with an unwavering resolution to make significant changes.

Women can only shine when there is real gender equality.