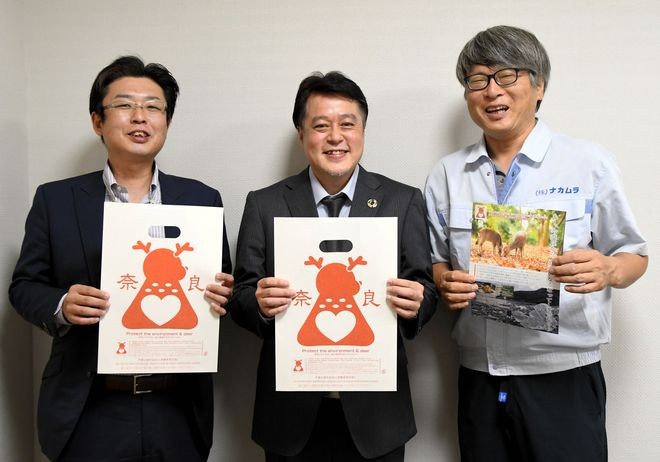 NARA--Some residents in Nara Prefecture have developed a practical solution to prevent deer from injuring themselves by gorging on plastic waste found in Nara Park: shopping bags deer can eat.

Local companies are teaming up to create and promote a special, eco-friendly paper called “shika gami” (deer paper) that will not harm the deer, even if they ingest it.

The park’s deer are beloved by locals and are known internationally for their polite, graceful bows. The government has even designated them as a national natural treasure.

But the deer have been swallowing plastic bags and other garbage amassing in the park, which has grown into a serious issue for the majestic creatures, leading to a number of deer deaths in recent years.

Cosmetics wholesaler Hidetoshi Matsukawa, 43, in Tawaramoto is behind the new, edible product.

He described the deer as “an important resource” for the prefecture that must be preserved and treated with respect.

Matsukawa came up with the idea for deer-friendly paper while visiting a local souvenir shop near Todaiji temple for business talks in spring 2019. He heard from a temple official there that “deer have died after swallowing trash by mistake.”

He also learned through media reports that, in one case, a mass of plastic was found lodged in a deer’s stomach.

“I should develop a kind of paper resembling ‘shika senbei’ (crackers fed to deer) to be used for packages,” Matsukawa recalled thinking.

Matsukawa reached out to two of his acquaintances who work in the prefecture: Takashi Nakamura, 48, who runs the paper-ware business Nakamura, located in Tawaramoto, and Kiyoshi Ogawa, 50, the head of the print and design firm Bunyodo, located in Sakurai.

They spent an entire year crafting the deer-friendly material, which is made from the pulp recycled from old milk cartons and the same rice bran used for shika senbei crackers.

Japan Food Research Laboratories examined the special paper for safety and determined that consuming the product poses no health hazard at least to human beings.

The Nara City Tourism Association and a souvenir store around Todaiji have already adopted the edible bags for use on a trial basis.

But one major hurdle to widespread adoption is the hefty price tag.

While an ordinary plastic bag only costs a handful of yen (a few cents), its shika-gami counterpart is priced at about 100 yen.

“The costs can be lowered if the material’s production increases,” said Matsukawa. “We will aim to cut the price for a wider use of the material.”

But the price point is not the only factor at play for locals concerned about the deer.

Nara Chuo Shinkin Bank, which is based in Tawaramoto and has 15 branches across the prefecture, introduced a total of 3,000 shika-gami bags at its outlets in August to support the effort.

According to bank representatives, documents and other forms will be handed to customers in the special bags--even though they are located far from the deer.

“There are no deer around Tawaramoto, where we are headquartered, but we sympathized with the developers’ determination to preserve deer at Nara Park,” said Teruo Nakata, 63, a managing director at the bank.

Matsukawa said part of the sales from the shika-gami bags will be donated to the Nara Deer Preservation Foundation.