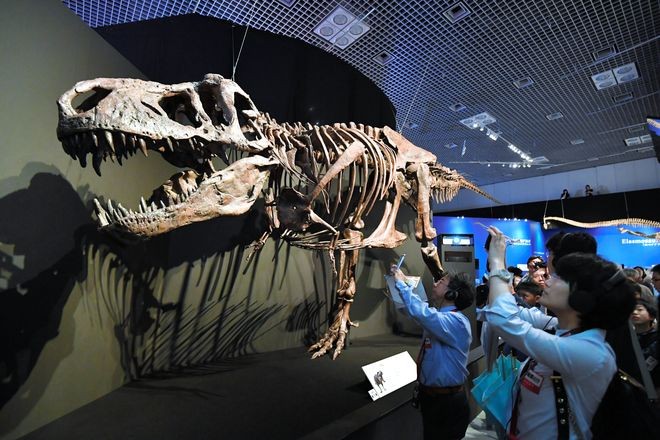 A skeleton model of Tyrannosaurus is exhibited at the Dinosaur Expo held at the National Museum of Nature and Science in Tokyo’s Taito Ward in July 2019. (Asahi Shimbun file photo)

Even in prehistoric days, dinosaurs could contract cancer, according to a “diagnosis” by a team of doctors and dinosaur researchers from Japan and Canada.

The finding, a world first, revealed that “cancer is a disorder deeply rooted in the history of biological evolution,” one team member said.

Scientists from Okayama University of Science in Okayama city's Kita Ward as well as Canada’s Royal Ontario Museum and McMaster University carried out a detailed examination of fossilized dinosaur remains and concluded the species contracted osteosarcoma, or bone cancer.

“No such studies had been conducted where experts including clinicians have closely looked into fossilized dinosaur remains and diagnosed the disease under the same standards as human diagnoses,” said Kentaro Chiba, an assistant professor of vertebrate paleontology at Okayama University of Science, who was involved in the survey.

The team’s discovery was published in the online edition of The Lancet Oncology on Aug. 4.

The international joint research team analyzed a leg bone fossil from a ceratopsian known as Centrosaurus apertus that is believed to have inhabited the Earth from 77 million years to 75.5 million years ago in the late Cretaceous Period.

The leg bone was unearthed in 1989 in Canada and has since been kept at the Royal Tyrrell Museum of Palaeontology in the country’s province of Alberta.

After finding that the end of the bone was deformed, the team conducted a medical analysis to determine the cause.

The researchers first examined the internal structure of the abnormally swollen part of the bone using high-resolution CT scanning. The results showed an area that should otherwise be filled with dense bone tissue was porous like a sponge.

The team then cut the bone fossil into thin slices at more than 10 points, so that more detailed examinations, including comparing tissue of the dinosaur with that from human osteosarcoma patients, could be made.

Based on the findings of those studies, doctors and other experts from the research team considered all possible causes of the problem, such as a bone fracture and osteomyelitis, or bone marrow inflammation, and determined the dinosaur had malignant osteosarcoma.

The leg bone's spongy section was due to traces of advanced carcinoma that invaded bone tissue, according to their definitive diagnosis.

VOX POPULI: Curling up with a book offers oasis from monotony of lockdown life

U.S. official says U.N. has ‘lack of curiosity’ on Xinjiang