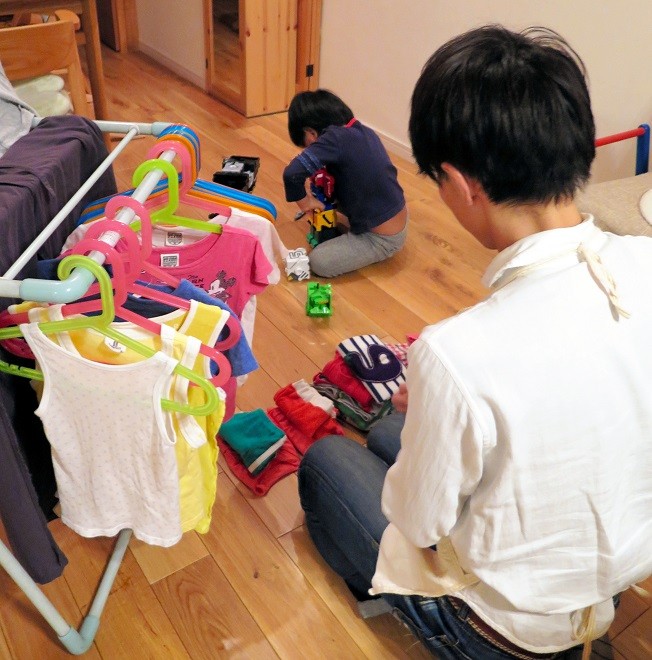 A father does the laundry while watching his child play. (Asahi Shimbun file photo)

Almost all male central government officials with babies born between April and June plan to take paternity leave after managers received an incentive to push the time off on their subordinates.

Of 3,035 officials surveyed, 3,030, or 99.8 percent, plan to temporarily leave work to help raise their newborns, according to the Cabinet Bureau of Personnel Affairs.

The remaining five officials were busy with disaster relief or responding to the COVID-19 pandemic. But they will also be encouraged to take paternity leave later.

In April, the bureau, which oversees the national government employee system, started to include in its evaluations of managers how eagerly they encourage subordinates to take paternity leave.

In fiscal 2018, only 12.4 percent of eligible officials took the time off.

The government has since encouraged its workers to take paternity leave, and its promotional campaign appears to be paying off.

The bureau’s survey results on Aug. 28 showed that the officials plan to take paternity leave for 43 days on average, and 85.2 percent are expected to take “more than one month” off, a goal set by the central government.

“It is very important for male officials to do housework and child-rearing to allow women to participate actively in society,” a bureau official said. “We would like to promote paternity leave so that the new trend will take root among officials.”

Under the new evaluation system, the efforts of senior managers and supervisors to promote paternity leave is reflected in their personnel grades. For example, as a part of their efforts, they are asked to write documents showing the preferred child care leave schedules of their subordinates.