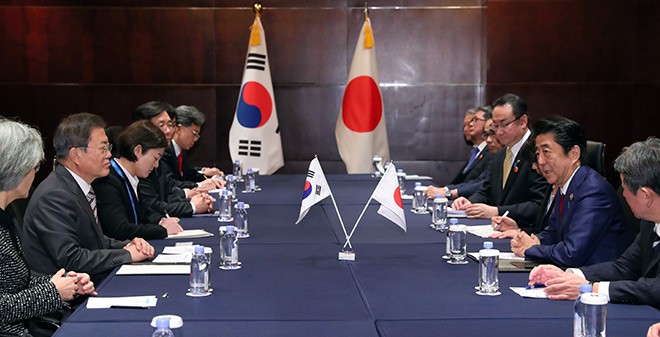 Ties between Japan and South Korea have remained frosty for years. Since Prime Minister Shinzo Abe’s long second tenure began in late 2012, the leader of neither country has visited the other except for when a big-time international event was held, such as the Olympics and a multilateral summit.

The two neighbors have much in common, such as respect for democracy, a solid commitment to free trade and squaring up to the North Korea problem.

Figuring out a way to rectify this extraordinary situation that bedevils this important bilateral relationship should be a top foreign policy priority for the next administration led by Abe’s successor.

Relations between Tokyo and Soul have been strained mainly by history-related issues. During the past eight years, South Korea has indeed taken an unhelpful, adamant attitude to certain issues and failed to make swift and effective responses to certain disputes.

But Japan, for its part, has not been exemplary in dealing with these issues and disputes due to a serious flaw in Abe’s diplomatic policy toward South Korea. The problem is the lack of a humble reflection on the historical fact that Japan inflicted suffering on people in the Korean Peninsula during its colonial rule of the region.

It will be difficult to repair the soured ties without Tokyo’s effective efforts to fix this problem.

Past government approaches to dealing with issues concerning South Korea were traditionally based on Tokyo’s sincere recognition of the unfortunate chapter of history when the Empire of Japan ruled the peninsula as its colony.

The thoughtful and considerate way Japan handled bilateral issues and disputes, which reflected this awareness, served as a diplomatic asset that helped promote economic and security cooperation between the two nations.

While pledging to carry on the spirit of these statements as a whole, Abe used different rhetoric in his statement to mark the 70th anniversary of the end of the war, which clearly stated that future generations should not be forced to continue apologizing for Japan’s wartime actions.

Abe tried to end unilaterally Japan’s efforts to come to terms with its wartime past without clearly expressing his own views about related history issues. It is hardly surprising that his attempt provoked a backlash in the countries Japan once colonized.

The latest blow to bilateral ties came from South Korea’s move concerning a dispute over Japanese compensation to Korean wartime laborers, known as “choyoko” (drafted workers). But the Abe administration’s retaliatory move to tighten control on technology exports to South Korea expanded the scope of the row to the economic sphere. This resulted in massive losses for both Japanese and South Korean companies.

The Abe administration also failed to continue efforts to deal with North Korea through consistent dialogue. The administration radically changed its policy toward Pyongyang from a single-minded pursuit of concessions through pressure to a dialogue-oriented strategy when the United States and North Korea began talking to each other.

But this change of strategy produced no results and no progress on the issue of Pyongyang’s past abductions of Japanese nationals.

The next administration, which will inherit the negative legacies of Abe’s misguided diplomacy toward the Korean Peninsula, should start by reopening normal dialogue with South Korea.

In South Korea, a growing number of politicians are calling on the administration of President Moon Jae-in to start taking steps to build a friendly relationship with Japan’s new government.

Tokyo should start working with the Moon administration to find a solution to the “choyoko” issue, which poses a burning diplomatic challenge for both governments.

Japan should then quickly retract its measures to tighten control over exports to South Korea. The Moon administration, for its part, needs to make active policy responses to the issue of compensation for wartime laborers.

What policymakers in the two nations should remember now is a 1998 joint declaration titled “A New Japan-Republic of Korea Partnership toward the Twenty-first Century,” issued by Prime Minister Keizo Obuchi and South Korean President Kim Dae-jung.

The two nations should restart healthy dialogue and mutual visits by their leaders for the sake of future generations and stability in Asia.