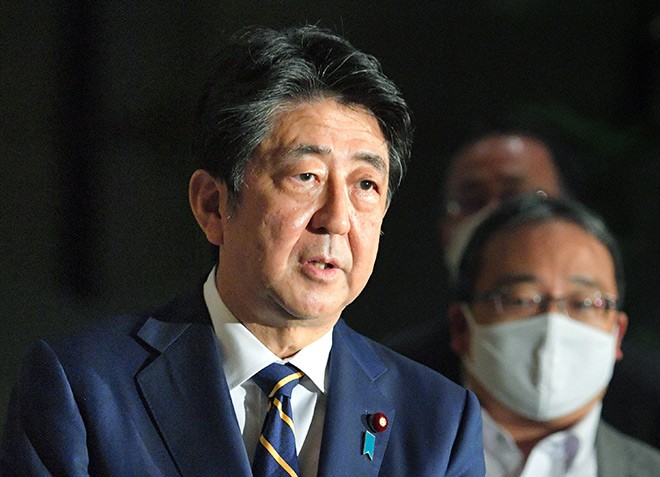 Having signaled in June that Japan needs a new direction in national security policy, Prime Minister Shinzo Abe took the unusual step Sept. 11 of issuing a statement about defending against ballistic missiles.

The statement reflected Defense Minister Taro Kono's surprise decision to abandon installation of a land-based Aegis Ashore missile defense system that Japan had committed to purchasing from the United States.

Abe called on the new administration to be announced in the coming week to establish a new national security policy by the end of this year.

However, the wording was deliberately vague as Abe has only days remaining in office as prime minister.

Abe was asked in June if his proposal included Japan possessing first-strike capability against an enemy about to launch a ballistic missile. He replied it was one topic that would have to be discussed.

However, the statement released Sept. 11 made no specific mention of having the ability to strike at enemy missile launch sites.

But the statement did raise questions about whether the missile defense system now envisioned would be sufficient to defend Japan, indicating that something more forceful was needed.

Without mentioning first-strike capability, the statement only said, “there is a need to heighten deterrence to further reduce the possibility of an attack on Japan.”

Despite Abe’s desire for preliminary discussions in his administration about national security to be passed on to his successor, political realities indicate that his plan may not get off the ground.

Party officials had grudgingly agreed that given the increased risks in the security environment facing Japan, discussions were needed on a new national security direction.

But soon after Abe announced in late August that he was stepping down, Komeito officials made it clear that debate on whether Japan should possess first-strike capability had returned to square one.

Moreover, Chief Cabinet Secretary Yoshihide Suga, the front-runner to replace Abe, has made a point of maintaining close ties with Komeito. This suggests he is unlikely to push an initiative that antagonizes the party.

The statement itself does not have much in the way of binding the next administration since it was not approved by the entire Abe Cabinet nor did it receive the approval of the relevant body within the ruling Liberal Democratic Party.