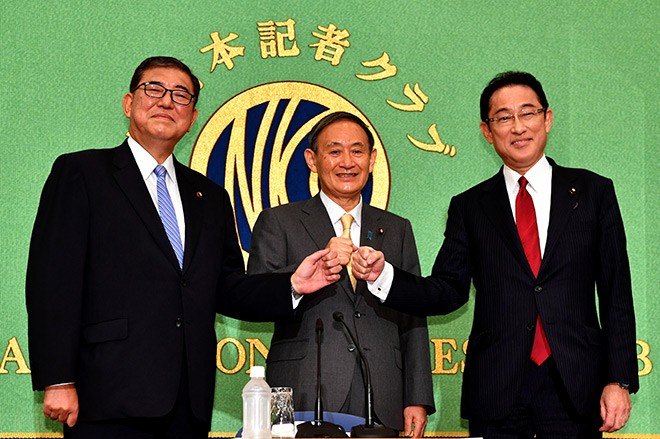 Chief Cabinet Secretary Yoshihide Suga is confident of his ability to succeed Shinzo Abe as prime minister, underscoring being part of the decision making of all key policy measures and pledging to continue following his predecessor's course.

“I was involved in the decisions of all important policy issues over the past seven years and eight months,” he said at a debate at the Japan National Press Club in Tokyo on Sept. 12, referring to the period Abe led Japan. “I am ready to push Japan forward as prime minister.”

Suga’s victory in the ruling Liberal Democratic Party’s presidential race on Sept. 14 to succeed Abe, who is stepping down for health reasons, appears a virtual lock as five factions in the party are backing him.

He is also drawing more votes from representatives of the LDP’s local chapters at present, compared with his rivals--Fumio Kishida, chief of the party’s Policy Research Council, and Shigeru Ishiba, former LDP secretary-general.

At the debate, Suga, 71, ruled out a hike in the consumption tax rate “for the coming 10 years” replying to a question from a reporter about whether he would consider raising it while in office.

With respect to the special measures law that was enacted earlier this year to respond to the new coronavirus outbreak, Ishiba, a critic of the Abe administration, said revising it will be an option.

“We should revise the law, if necessary, to contain the pandemic,” he said.

Some are calling for toughening of the law that can enforce closures of restaurants and other venues in return for providing them with compensation to control the pandemic.

But Suga disagreed with a revision, saying, “It is important to deal with the pandemic under the framework of the current law.”

He added that the government can expand the relief package to troubled businesses with cash handouts or no-interest loans with no collateral.

On the relocation of the U.S. military’s Futenma airfield in Okinawa Prefecture, Suga defended the Abe administration’s policy of moving the base to the Henoko district of Nago, also in the prefecture, despite fierce opposition from islanders.

“Given the danger of the Futenma facility, relocating it to Henoko should be pushed,” he said, referring to the U.S. Marine Corps Air Station Futenma sitting in the heart of a residential area in Ginowan.

He said sufficient inquiries have been conducted to show that the government was not at fault.

But Ishiba said he would reopen the investigation into the Moritomo Gakuen scandal, in which Finance Ministry files were tampered with to justify a whopping discount given to the school operator.

The wife of a Finance Ministry employee who committed suicide after he was ordered to doctor the ministry files is demanding a fresh inquiry.

Kishida signaled the possibility of launching a fresh investigation, saying, “Whether sufficient explanations have been given should be decided by the party receiving the explanations.”

As for growing speculations in recent weeks that a snap election may be called by dissolving the Lower House later this year, Suga was noncommittal, saying, “That is the new prime minister’s call.”

GOHAN LAB/ Ginger pork: Add half the sauce before and after cooking the meat for aroma