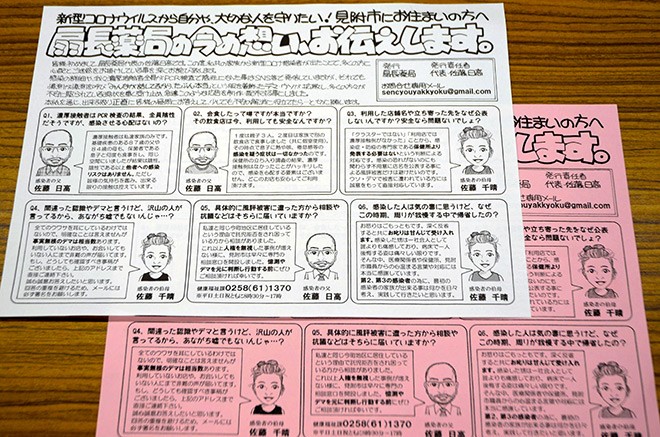 A flier created by a family whose son tested positive for the novel coronavirus was distributed in a local newspaper in Mitsuke, Niigata Prefecture. (Kazuhiro Itami)

MITSUKE, Niigata Prefecture--A man here whose son tested positive for the novel coronavirus resorted to asking a newspaper to distribute fliers to dispel false rumors that took a toll on people and businesses that have nothing to do with the case.

“This is what I feel right now,” reads the headline of the flier made by Hidaka Sato, printed on B-4 paper.

“Only our family members were in close contact with my son and nobody else," the 57-year-old pharmacy owner, who resides in Mitsuke, Niigata Prefecture, wrote.

"All of our family members took a (polymerase chain reaction) test and were confirmed negative for the novel coronavirus. We do not pose an infection risk to others.”

Sato on Aug. 29 asked the local newspaper The Niigata Nippo to distribute the flier as an insert in the paper, read by 14,000 or so subscribers in Mitsuke and some parts of neighboring Nagaoka city.

Ten days earlier, his son who lives in Tokyo tested positive for the virus while he was visiting Sato in the town.

Hidaka's older sister Chiharu Sato, 59, who manages the pharmacy with him, got a call from an acquaintance, pressing, “Is it true that someone there tested positive?” It was even before Sato relayed the news to her.

The pharmacy’s phone began ringing non-stop after that, with callers blaming the family for bringing the virus to the town. The store also received numerous emails accusing them of causing trouble.

Sato reached the limit of his tolerance when he learned that businesses that he had never even heard of had become a target of groundless rumors connected to his family.

“This place got visited by sanitation workers,” one rumor went. “Their staff took PCR tests,” another insisted.

The businesses lost sales due to the rumors, Sato also heard.

He knew that the rumors were completely untrue, but he found he could not just ignore them.

Thus, he said, he called some of the businesses and apologized.

“I was bothered by guilt,” Sato said. “They did nothing wrong, yet they suffer from false rumors.”

Finally, he decided to make the flier, to avoid causing damage to “people and businesses who have no connection to my family.” Doing so would be worthwhile, he thought, “even if it would only slightly" ease the pain of the businesses, Sato said.

It was not his first effort to refute the rumors.

Sato started addressing them just two days after his son tested positive for the virus on his Facebook account.

Nobody in the restaurants that Sato and his family had been to were deemed to have had close contact with his son, the public health center concluded.

Sato posted a note at the pharmacy saying his family members had been proven not to be carrying the virus and customers need not to worry about contracting it.

But his efforts made no difference.

Sato still received calls, in which his neighbors complained over how much their lives had been disrupted.

One caller said a nursery refused to take care of their child for two weeks. Another caller said they were told by coworkers in their office, “Do not to come close to me.”

“Facebook can only reach certain people,” Sato said he realized. He then turned to traditional media, making the newspaper insert.

Sato contacted Toru Murakami, a 40-year-old illustrator in the city, and asked him to design the flier.

Murakami in July posted a five-frame comic strip on the city government’s Facebook account, urging residents to be kind to COVID-19 patients.

Sato became aware of it after it was picked up by news media.

Murakami said he was surprised that what he had heard about the case from others was entirely different from what Sato told him.

They held nothing back in designing the flier, to best address what they thought were the public’s most pressing questions.

The flier discloses Sato’s full name as well as Chiharu’s, the pharmacy’s name and an email address where the public can make an inquiry.

“Anonymous information can be deemed unreliable and would not be enough to protect people and businesses who have nothing to do with (us) from the damages caused by false rumors,” Sato said.

Murakami drew a portrait of Sato and Chiharu on the flier to accompany the information.

Sato did apologize for one thing in the insert, the fact that his son traveled from Tokyo to his hometown.

“We deeply regret that and accept (the public’s) criticisms,” Sato wrote.

The distribution of the flier appears to have worked to some extent toward setting things straight. Calls and emails to the pharmacy from people who just hurl abusive language at the family have declined, according to Chiharu.

They still hear from some angry callers and writers, she said, but “now they give us a fuller explanation of why they are so angry.”

Chiharu said what the family has gone through “can serve as a useful reference for the next case.”

“When the news breaks that the city has another COVID-19 patient, this flier might keep a similar situation at bay, I hope,” Chiharu said.