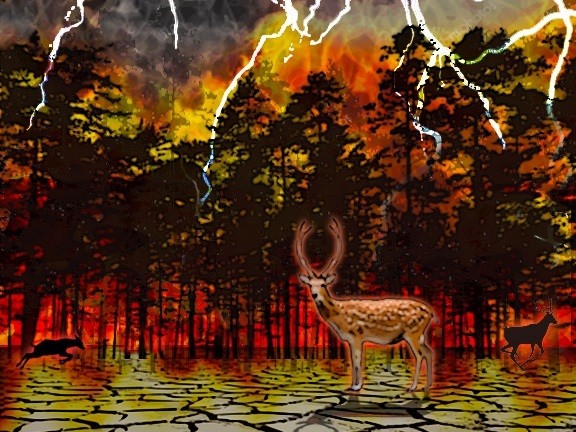 another sunrise--
another prayer
for rain
--Marek Kozubek (Bangkok, Thailand)

bare-rooted trees
the drought in the well
of my thoughts
--Rashmi VeSa (Bengaluru, India)

thirsty for change
a river of people
flooding the streets
--John Hawkhead (Bradford on Avon, U.K.)

Scotch with ice--
even a murmur
near silenced?
--Yutaka Kitajima (Joetsu, Niigata)

A river with flames flowing down both sides inspired this haiku, in which the haikuist called out “California is burning.” Extremely hot weather, drought, dry lightning and high winds have fueled the biggest wildfire season in the western United States. Safe for now at the confluence of the Sacramento river and American river, Scott Hundahl suggests the high sierra areas offer the best place to escape from all the central valley smoke, noting “beyond the peaks, there are great views of Lake Tahoe if the air stays clear.”

Using both hands to cling to the railing of a bridge in Borken, Germany, Christof Blumentrath staggered by a dried-up riverbed. He reported that drought has become a big problem in the state of North Rhine-Westphalia.

summer stroll
under the bridge
a sea of poppies

going back home--
our childhood river
has run dry

Didactic poetry instructs philosophic, religious, artistic and scientific morals. Zen religion, spiritual art and Buddhist philosophy are often served part and parcel to discerning haikuists. Let’s compare a didactic 17-syllable message to an 11-syllable poem with a simpler purpose. Lysa Collins originally wrote this first line because she felt the adjective “evoked the exact feeling” she wanted to convey about the “expressive face of a baboon sitting completely alone beside a dry stream bed.” It was later reworked to the second version below to appeal to the sensitivities of general readers.

lugubrious face
of the gaunt baboon--
from the droughts in Africa

the sad eyes
of the gaunt baboon--
climate change

Saddened in Peterborough, Ontario, Sue Colpitts shared this cathartic one-liner inviting you to choose whether the word secret should be read as a noun or adjective: wildflowers secret baby bird grave. She later erased all evidence of the moment by composing this three-line haiku.

T.D. Ginting wants you to select an appropriate ending for his religious experience penned in Murakami, Chiba Prefecture.

Sound of the pipe organ--
bread and wine
becoming (spi)ritual

During the drought season in Accra, Ghana, Justice Joseph Prah watched farmers at the plow hanging onto a bare thread of hope.

isolation
our wish for
rain

Eva Limbach showed concern for “increasingly frequent droughts in Africa,” particularly in regions facing crises and a high probability of war. Hundahl, who recently retired as chief of surgery, suggested that his colleagues “in health care find gang shootings and rioting in Chicago and elsewhere in America of great concern.”

dried up fields
the promise of little pay
and a gun

Satoru Kanematsu reflected a thousand times from Nagoya, as he prepared to observe the United Nation’s International Day of Peace on Sept. 21.

Just one sun
above thousands of
sunflowers

Living in southern Australia, drought is a theme close to Louise Hopewell’s heart after having experienced a terrible bushfire. Dragan J. Ristic returned empty-handed to his home in Nis, Serbia. Richa Sharma watched a home disappear in Ghaziabad, India.

Roberta Beach Jacobson coexists with thorny roses and prickly cacti that know how to protect themselves.

Writing from Guilford, Connecticut, Kat Lehmann shared this one-line poem about what she has learned from living the way of the tall desert cactus: filling the inner reservoir saguaro.

Murasaki Sagano admired a towering cluster of red flowers in her Tokyo garden. The annual plant species has been cultivated as a grain and eaten by humans for over 4,000 years. Anne-Marie McHarg paid tribute to the last rose in a London garden. Writing from Dusseldorf, Germany, Bakhtiyar Amini commented on the American political climate. A fleeting autumn wind swept by John Daleiden’s porch in Phoenix, Arizona.

African hot
only the fan moves in the room

heat haze
the shimmering swirls
of her unborn child

Masumi Orihara refreshed at a well that connected to a vein of groundwater in Baluchistan, Pakistan. It appeared in “sharp contrast,” she said, “to the stretching desert under a boiling sun.”

Teiichi Suzuki chides Canada’s inaction on climate change for having lost the glacier-fed Slims river in 2016.

blazing sun …
from his bunch, the fruit vendor
plucks a banana

dumplings steaming in a jar:
people inside cars
in a Delhi summer