In the spotlight: Suga seeks to build own diplomatic style 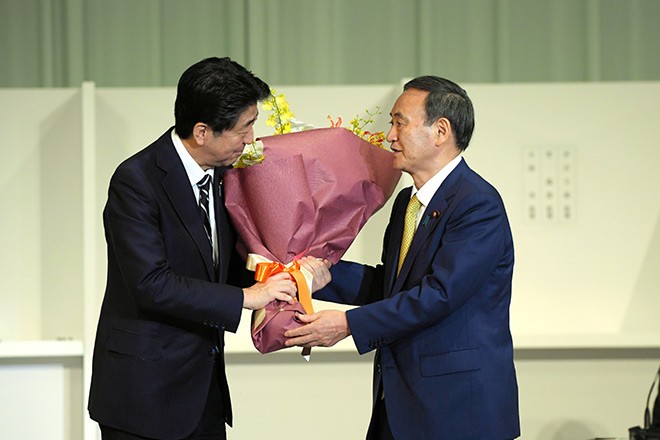 Yoshihide Suga admits he's no Shinzo Abe in foreign diplomacy as he prepares to succeed him as the next prime minister on Sept. 16.

“Prime Minister Abe’s summit diplomacy is truly wonderful, and I cannot do the same,” Suga said during a debate on Sept. 12 at the Japan National Press Club in Tokyo with his two rivals for the Liberal Democratic Party presidency.

“I want to stand firm in my own diplomatic footing,” Suga added. But he did not disclose what his own style will be like.

Abe has visited many countries around the globe and in particular established a close personal relationship with U.S. President Donald Trump.

In addition, Suga also said at a news conference on Sept. 14 that Abe “has fostered an extremely trusting relationship with Russian President Vladimir Putin.”

“Foreign diplomacy is a collective thing. I want to draw fully upon the strength of everything and anything,” Suga said about peace treaty negotiations between Japan and Russia.

The novel coronavirus pandemic stands in the path of Suga’s debut in the diplomatic arena.

This year, however, due to the pandemic, their speeches will be prerecorded and face-to-face diplomatic opportunities will be significantly limited.

One of the many tasks awaiting Suga to tackle as soon as he assumes the leadership role is the longstanding North Korean abduction issue.

Sakie Yokota, 84, whose daughter Megumi was abducted by North Korea more than four decades ago, holds on to hope that the new prime minister will press forward the issue and bring her child back to Japan.

“My daughter was taken away. She has not been seen. I can’t hear her voice. There is no information about (her),” said Yokota, whose husband, Shigeru, died in June at age 87.

“I think (Suga) thinks the abduction issue needs to be solved and I trust him (on that),” she said on Sept. 14. “It would be great if the central government takes action.”

Suga at a news conference declaring his campaign for the LDP's presidency on Sept. 2 said that he will inherit the Abe administration’s policy on the abduction issue. Abe has stated the abduction issue is the government’s top-priority issue.

“I am willing to find a new way into the issue by meeting with North Korean leader Kim Jong Un without any preconditions,” Suga said.

Shigeo Iizuka, 82, whose younger sister Yaeko Taguchi was abducted by North Korea in the late 1970s, said, “The abduction issue is not something that will disappear and go away.”

“There are some who died while waiting to see their loved ones again after years of wishing and hoping,” said Iizuka, who represents a group called the Association of Families of Victims Kidnapped by North Korea.

Iizuka said he hopes Suga will “undertake the issue in concrete terms and press it forward as soon as possible.”