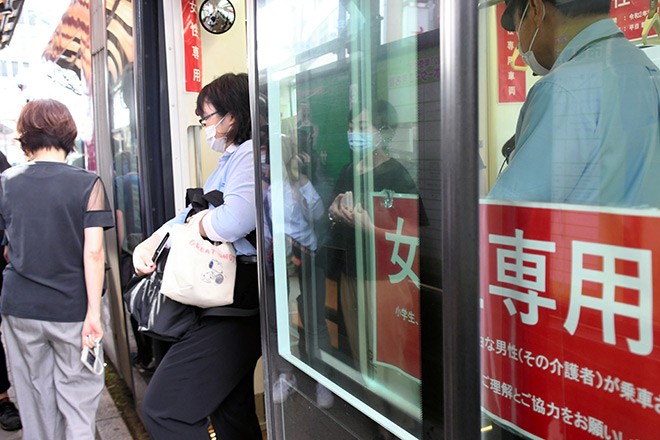 A passenger gets off a women-only tram car in Kumamoto’s Chuo Ward on Sept. 14. (Nanami Watanabe)

The Kumamoto City Transportation Bureau, which operates streetcars in the city, began running the women-only cars on a trial basis on the morning of Sept. 14, at the request of female riders.

Many women have become the targets of sexual harassment from groping or upskirt photos taken inside jam-packed tram cars during rush hour, with passenger loads often exceeding 100 percent capacity.

The transit bureau will later decide whether to bring the women-only cars into full-scale use after conducting a passenger survey, which would make it a first.

None of the 32 tram line operators in the country have implemented women-only tram cars on a full-scale basis on their lines, according to the transport ministry’s Railway Bureau.

The bureau operates 45 trams in total. Of these, eight low-floor, two-car trams have been equipped with the women-only cars. Signs that read “women-only” are attached to the windows, doors and joint sections of the cars.

Boys of elementary school age or younger, and people with disabilities and their caregivers, can also use the women-only cars, regardless of their gender.

Eight trams equipped with the cars are running on all lines operated by the bureau on weekdays at rush hour, from 7 a.m. to 9 a.m.

The trial runs until the end of December.

When a man got on a women-only car on Sept. 14, a conductor showed him to the front car. Women were also riding on the front car.

Female riders responded favorably to the trial run of the women-only cars after it was announced, according to the city transportation bureau.

The bureau said it also received some contrary opinions, which were mainly from organizations and individuals based in areas outside of Kumamoto Prefecture.

“If you are introducing ‘women-only’ cars, there should be ‘male-only’ cars as well,” one said.

“How do you distinguish between men and women?” another asked, rhetorically.

“The trial operation is not intended to force passengers to choose cars according to their gender,” Tatsuya Ito, head of the tram operation management section at the bureau, told The Asahi Shimbun. “We just hope the new measure will help eliminate groping and upskirt photos on trams. We’ll decide whether to install the cars (on a full scale) after hearing a range of opinions.”