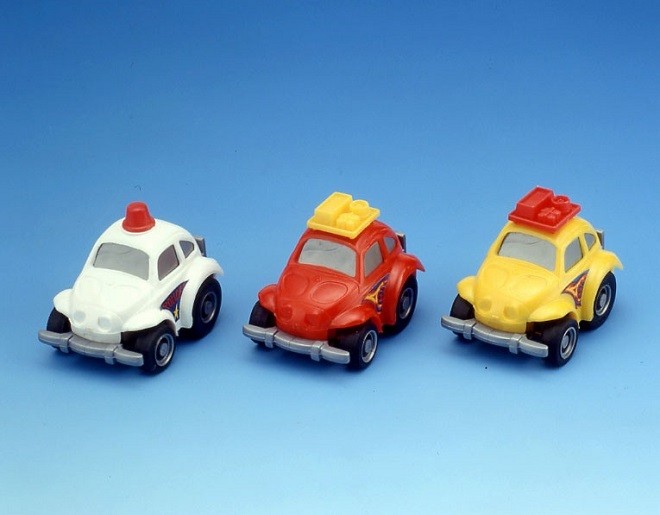 A boy growing up in Japan in the 1980s would have been tickled pink to get his hands on a Choro-Q toy car, also known as Penny Racers.

The magic was in revving the rear wheels backward to wind up a spring, which propelled the toy forward at dizzying speed when released.

Many of those boys, now middle-aged men, must have become misty-eyed at the thought that it has been 40 years since Choro-Q toy cars made their debut.

Mainstay Choro-Q products are now targeted at grown-ups, according to the manufacturer.

Choro-Q is the name of a line of minicars released in 1980 by Takara Co., a major toymaker that was later merged with Tomy Co.

Of the 3,000 Choro-Q models marketed to date, more than 150 million units have been sold, a Tomy representative said.

The prototype was born in 1979. The series was called the “Mame Dash” when it was put on trial sale, with mame (bean) being a Japanese prefix for small things.

The company finally settled on Choro-Q for being “cute” cars that scamper about (“choro-choro” in Japanese). Each car is only 3 centimeters wide.

Tomy has set Sept. 9 as "Choro-Q Day." It is Tomy's way of punning on the Q in Choro-Q as “kyu” is Japanese for nine.

The Choro-Q remained a cheap staple, priced at only 350 yen ($3.30) per unit, over the first 30 years or so following its release.

A hit with customers was a contraption that allows the front wheels of a Choro-Q to lift off the floor in a wheelie when a coin, such as a 10-yen piece, is inserted into a slot at the rear of its body. A manga adaptation of the Choro-Q set off a public craze for the products in the 1980s.

The Choro-Q evolved over time. The “Q Steer” model introduced in 2006 can be controlled remotely with infrared rays.

The Q-eyes, released in 2014, can detect obstacles and steer itself.

Forty years after its formal release, the Choro-Q now has a mainstay subseries for its adult fans: the “Choro-Q Zero,” with unit prices of 2,000 yen or so and intended for those aged 15 or older. Products in that line imitate components and the atmosphere of real cars.

Made-to-order models are also being manufactured for corporate clients. Custom-made Choro-Qs are being sold by businesses, at museums and elsewhere.

Hiroaki Sumiya, a Hamamatsu company employee who owns more than 10,000 Choro-Qs, operates “Choro-Q Gakuen,” an unofficial fan site, where he displays photos and videos of his collection.

“The main allures of Choro-Qs are their palm-size cuteness and the abundance of available models, which is irresistible to geeks such as myself,” Sumiya, 47, said. “Driven by a spring, they are also eco-friendly, which is just right for our age.”