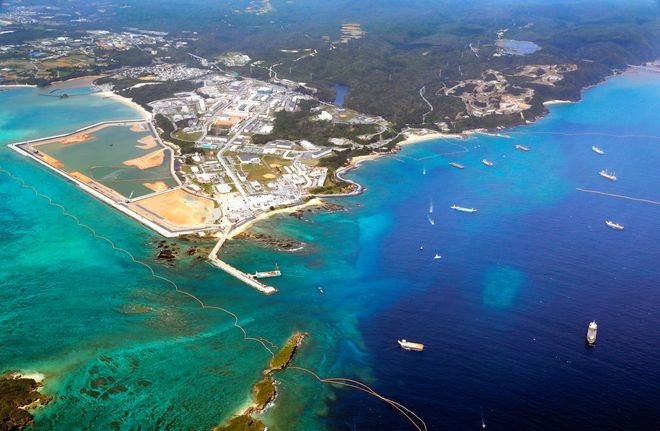 Reclamation work is under way in March to build a new U.S. air base off the Henoko district in Nago, Okinawa Prefecture. (Asahi Shimbun file photo)

Art is the last thing I would associate with words spoken by Yoshihide Suga, who became the prime minister of Japan on Sept. 16.

But being cunning can also be an art, and that reminds me of Suga's repertoire of boilerplate responses to criticisms during his years as chief Cabinet secretary.

"Goshiteki wa ataranai" (Your point is irrelevant) and "mattaku mondai nai" (there is no problem at all) were his all-purpose pronouncements for rejecting any further discussion. They came in handy on many occasions.

"Shukushuku to susumeru" (We will proceed firmly) was his go-to phrase, used mainly on matters related to the relocation of U.S. Marine Corps Air Station Futenma to the Henoko district in Okinawa Prefecture.

The controversial Henoko reclamation project, begun despite strong popular opposition, has been considerably delayed since the discovery of soft ground. But the new prime minister is apparently determined to proceed with the project, maintaining his "the case is closed" attitude from his chief Cabinet secretary days.

Not once did Suga utter the word "review" during the Liberal Democratic Party presidential election campaign.

One part is that of a politician, born in a snow-bound rural area of Akita Prefecture, who cares deeply about the prefectures.

The other is of a cold-blooded politico who does not tolerate dissension.

Which is closer to his real persona? I think the answer lies in his attitude toward Okinawa.

Among Suga's sayings to date, there is one remark that should never be forgotten.

The root of the Futenma problem lay in the post-World War II expropriation of land by the U.S. military that forced the landowners into hosting the Futenma base.

When this was pointed out by an Okinawa governor, Suga rebutted, "I disagree. After the war, everyone all over Japan made tremendous efforts to build a peaceful nation."

Unlike the rest of Japan, Okinawa alone became a bloody battleground during the war and came under U.S. military administration after the war.

The people of Okinawa suffered like no other Japanese citizens, and the LDP of the past had politicians who understood that and tried to make things right.