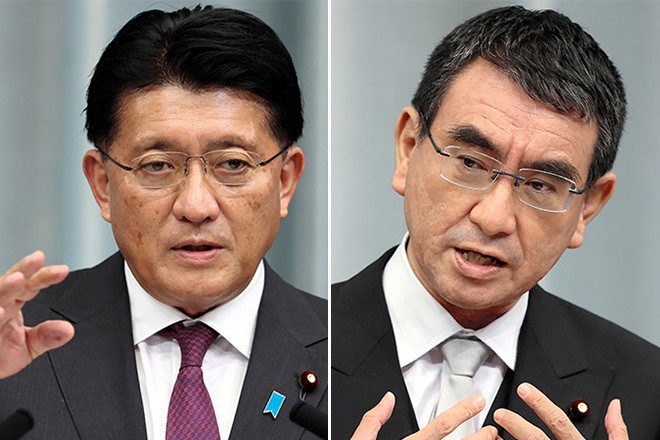 Although Prime Minister Yoshihide Suga will likely follow the policy course set by the Shinzo Abe government, administrative reform and digital transformation are two areas that could separate the new leader from his predecessor.

Suga, 71, retained eight Cabinet ministers from the Abe administration, but he named Taro Kono, the previous defense minister, as state minister in charge of administrative reform.

Long considered a maverick in political circles, Kono, 57, is not shy about stating his views, even if it means stepping on the toes of central government bureaucrats.

As defense minister, Kono decided to scrap the land-based Aegis Ashore missile-defense system that Japan was buying from the United States. He persuaded Abe to go along with the decision.

Suga, who has always highly appraised Kono’s abilities, may have decided to use Kono’s new position as “drastic medicine” to show he is serious about producing results.

At his first news conference as prime minister, Suga on Sept. 16 said he instructed Kono to set up a hotline that ordinary citizens can call to offer suggestions, for doing away with the stovepipe organizational nature of the Japanese bureaucracy.

During the campaign for LDP president, Suga argued that the novel coronavirus pandemic revealed how slow the government was in using digital technology to improve efficiency.

He proposed establishing a digital transformation agency that would cut across the traditional jurisdictional lines of central government ministries.

Suga named Takuya Hirai, considered one of the most digital-savvy lawmakers, as state minister in charge of digital transformation.

Hirai, 62, previously served under Abe as state minister in charge of information technology.

Hirai was picked for the newly established portfolio even though he belongs to the LDP faction headed by Fumio Kishida, the former policy chief who ran against Suga in the party’s presidential race.

The new digitization minister on Sept. 16 admitted to reporters that he faces a long road ahead.

“To be honest, only a few people really understand the most advanced information technology in the Kasumigaseki district (where many central government ministries are located),” he said.

Hirai said one of the first things he would do is set up a team to prepare for the establishment of an agency for digital transformation.

Suga has indicated that he would not leave administrative reform entirely up to Kono and Hirai, given the huge resistance they will likely face from ministries that may be forced to give up some authority.

Under Abe, Suga was chief Cabinet secretary for seven years and eight months, and the post gave him a closeup view of how the various ministries worked.

Suga is probably confident that he is in the best position to push through administrative reform.