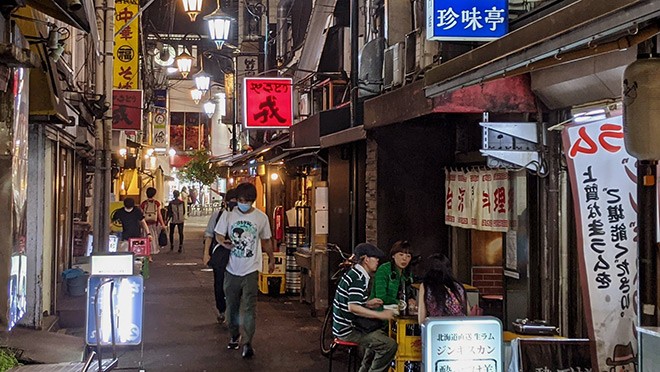 Bars and restaurants in an alley near JR Nishi-Ogikubo Station in Tokyo’s Suginami Ward are open for business on Sept. 16. (Ryo Oyama)

Happy days were here again for Kodai Inokuchi on Sept. 16 as bars and restaurants near his home in Suginami Ward returned to normal late-night hours.

“I usually arrive at the station around this time after work,” said Inokuchi, 36, a company employee. “Finally, I can have a drink and chill out in my neighborhood.”

The alcohol was flowing again in Tokyo’s 23 wards late on Sept. 16 after the metropolitan government lifted restrictions on restaurants and bars to deal with the novel coronavirus pandemic.

But for many such business owners in the capital’s nightlife districts, the first night was anything but happy times as they struggled to lure back customers.

Starting from early August, the government requested restaurants and bars, including karaoke facilities, that serve alcoholic beverage to close at 10 p.m. to lower the risk of spreading the virus until Sept. 15.

The next night, customers were back on the streets where small bars and restaurants stand near JR Nishi-Ogikubo Station in Suginami Ward.

Many bars in the area are leaving the doors open for improved ventilation as a health protocol.

For a 39-year-old male owner of a bar in the area, Sept. 16 was the first evening to resume regular business hours and stay open until 5 a.m. in a month and a half.

“I wonder if the customers we have lost are coming back,” he said.

Before the pandemic, the peak hour for the bar was at around midnight. Regulars rarely came to have a drink before 10 p.m., the time the government set for businesses like his to close for the evening.

Sales dropped to one-third of an average year. He was not sure if his bar could remain in business, he said.

Bars and restaurants that serve alcoholic beverages in the capital were first asked by the metropolitan government to shorten their business hours in early April, after the central government issued a state of emergency over the pandemic.

The restrictions were eased on June 19, but the metropolitan government on Aug. 3 again asked these businesses to close between 10 p.m. and 5 a.m. until the end of the month, as the capital saw a spike in new cases.

The government then decided to extend the restrictions until Sept. 15 for such businesses within the 23 wards, while allowing those outside the area to serve alcohol and stay open after 10 p.m.

The man’s bar, like many other nightlife businesses, have been at the mercy of these decisions.

The bar is located on the edge of Suginami Ward and just a stone's throw away from the border between the ward and Musashino, a city in western Tokyo.

To get to Kichijoji, a busy area with many bars and restaurants in the city, is only a minute's walk from the bar.

“It’s OK to stay open until late at night in Kichijoji, but not in Suginami, (officials) said. It didn’t sit well with me. The guideline was too loose, lumping all 23 wards together,” he said.

The man also questioned if the restrictions were actually effective in containing the spread of the virus.

“The next time the number of new cases increases again, I want the officials to come up with something other than asking (us) to shorten business hours,” he said.

NOT EVERY NIGHTLIFE BUSINESS COMPLIED

Some businesses went against the officials' request and have remained open after 10 p.m.

An underground bar in the Nishi-Ogikubo area was one of them.

The female owner, 51, said the bar has been known as a popular place to stop by after having a meal or attending a party.

The bar has stayed open until after midnight. She said she has taken thorough safety measures, such as spending an hour to sanitize the entire bar before opening and opening the door for ventilation and disinfecting a karaoke mic every time after a customer sings a song.

A 28-year-old male employee at an "izakaya" pub near the station said, “Some businesses remained open late during the period of restrictions. Actually, more people went to such places, I think.”

The Kabukicho district of Shinjuku Ward has seen a spike of new infection cases among nightlife workers and customers.

Hidekazu Maki, 45, who owns an izakaya in the district, said about the business’ prospect, “It’s not good, not at all.”

He used to run four izakaya in Kabukicho. But after the central government issued a state of emergency, he closed three of them.

The last remaining one has stayed open until 10 p.m., following the metropolitan government’s latest request.

On Sept. 16, Maki returned to regular hours and kept the izakaya open until midnight.

Maki stood outside under the neon sign, working to entice customers into the establishment, which has about 100 seats.

But his effort went unrewarded.

Only six customers came to the izakaya as of 9 p.m. Then they all vanished after 10 p.m.

Maki ended up closing the pub earlier than expected.

The number of new cases among nightlife workers has gradually decreased, but the damage inflicted on Kabukicho's reputation appears to be lingering.

“(Kabukicho) has been perceived as a symbol of (virus-ridden) nightlife districts,” he said.

Maki said he has reduced the number of employees from 10 to two. The izakaya has launched a to-go service. But orders rarely come because the place is not close to Shinjuku’s business district.

Maki is not the only one struggling. Half of the eight businesses in the same building where Maki’s izakaya is located have closed because of the pandemic.

Maki thinks his business will suffer the same fate at the turn of the year.

“Kabukicho is not what it used to be, Japan’s No. 1 nightlife district. There is nothing left of it,” he said.

The pandemic apparently changed the minds of people in terms of how to spend their time after work.

A 32-year-old man who works at a staffing services company came to Kabukicho with another person. They dined at a Chinese restaurant but did not order alcohol.

The man said he used to go out to have a drink once a week before the pandemic.

“Now, I don’t go to a small place or a crowded place,” he said, while wearing a face mask. “I don’t think I will ever drink alcohol at an izakaya until a vaccine becomes available.”

A major chain karaoke bar in Kabukicho, which had followed the restrictions, stayed open until 11 p.m. on Sept. 16.

The bar has reduced the number of customers allowed to use a private room to half.

The customers have returned gradually, as 90 percent of the rooms are already booked for certain times of a day on weekends, the bar’s representative said.

A male employee said the karaoke bar is well ventilated.

“It is an enclosed space, but I want to emphasize that it is a safe space,” he said.

In the Higashi-Oi district of Shinagawa Ward where hole-in-the-wall bars and restaurants stand close to each other, many businesses stayed open after 10 p.m. on the evening.

Most have suffered a dramatic loss of customers since late July, when the ward office announced that workers and customers at multiple eateries in the district tested positive for the virus.

Hirotomo Hirakata, 65, who manages a sushi restaurant there, said all reservations were canceled immediately after the news broke.

“People thought the virus had spread throughout the district,” said Hirakata, who overheard pedestrians saying, “Ah, this is the street where an infection cluster occurred.”

“I was really frustrated,” he recalled.

Businesses in the local shopping district got together and launched a campaign to implement anti-virus measures.

Foot traffic has slowly returned, but the number of customers in the first half of September was about 70 percent of the previous year.

“I want people to know that, because of this recent experience, the entire district has taken full measures to prevent the infection from spreading,” Hirakata said, hoping the eased restrictions helps bring the district back to “normal."

(This article was written by Erina Ito, Ryo Oyama and Naomi Nishimura.)