Nations will need to rethink their structures after virus, Japan says 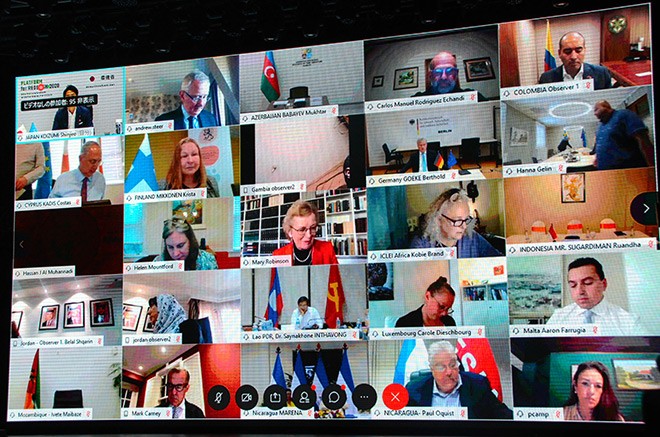 A ministerial-level online conference on the novel coronavirus pandemic and climate change on Sept. 3 was attended by 96 countries. (Mutsumi Mitobe)

Japan and parties to the Paris Agreement concurred on the need for redesigning their social and economic systems as a way to recover from the fallout of the COVID-19 pandemic and to address climate change.

It came at a ministerial-level international conference held online at Japan's suggestion as a stopgap for the 26th U.N. Climate Change Conference (COP26), which was postponed due to the novel coronavirus pandemic.

Japan served as chair of the Sept. 3 conference. In the general overview of the chair released on Sept. 11, three directions were spelled out for countries to look at for guidance: a society that is decarbonized, decentralized and has a circular economy.

Japan urged all 197 countries and regions who are parties to the 2015 Paris Agreement on climate change to participate in the online discussion. Ninety-six countries responded, including China, a major emitter of greenhouse gases.

Environment Minister Shinjiro Koizumi, who chaired the meeting, called the novel coronavirus a product of friction between humans and nature.

Addressing climate change and the deterioration of the environment without delay will help the global community achieve the sustainable development goals toward 2020, he also said.

It was the first time for Japan to assume the role at an international conference on climate change since 1997, when the Kyoto protocol was adopted at COP3.

At the Sept. 3 meeting, Koizumi stressed the need to redesign social and economic aspects of countries to avoid a return to their pre-pandemic states once the virus is under control, and proposed a shift to societies that are decarbonized and decentralized and have a circular economy.

As a possible model, the minister described Japan’s increased use of hydrogen derived from renewables as energy sources, as well as electric vehicles delivering goods to households due to a spike in demand amid the health crisis.

He also signaled Japan’s readiness to further cut greenhouse gas emissions, despite the country not having committed to doing so previously at the United Nations.

The expanded use of renewables, utilization of hydrogen as a new energy source in various segments of society and a shift to green energy in industries and households have growing urgency, according to the general overview of the meeting.

In a circular economy, it is important to create a synergy between conservation and economic growth, and called on companies to accelerate efforts to recycle resources as part of their business strategies, the general overview said.

It also referred to the need to move away from centralized societies in the post-coronavirus era, saying the pandemic has laid bare their limitations.

As a solution, societies are urged to promote remote working, digitization and introduce a decentralized community-level energy network that is self-reliant.