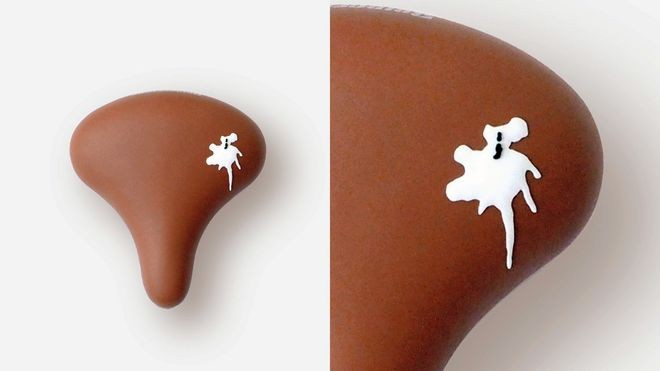 The anti-theft sticker is designed like a bird dropping. (Provided by Reoga Motoki)

Reoga Motoki noticed one day that a bird left a mess on his bicycle.

He recalls thinking at the time that at least thieves would never consider stealing his bike now. A light bulb went off in his head.

He created a novelty sticker that mimics the appearance of bird droppings.

“The label will enable you to recreate a realistic bird dropping if you apply it so that part of the dropping appears to droop down the side of the seat,” said Motoki. “The sticker is applicable to umbrellas as well as bicycles. You can use it for any purpose, like springing a surprise on friends.”

His sticker is now for sale online through the hip variety store Village Vanguard Co., which is headquartered in Nagoya.

“If you find a bird dropping on your bicycle seat, you will feel embarrassed,” the website’s product description reads. “The same sentiment applies to those thinking of stealing bikes. No one would bother to ride away on bicycles contaminated with bird dung.”

The sticker is the result of a crowdfunding campaign, based on Motoki’s school project, and is a sort of re-issue.

The product was originally given a limited run five years ago by Village Vanguard, after Motoki sent the company his idea. He was a student at the graduate school of the Chiba Institute of Technology at the time.

But the site has now released an updated version, created by Motoki himself.

“I loved the product so much that I raised funds through crowdfunding to manufacture it again, after the article’s sales had been suspended,” said Motoki.

Motoki, 28, who works at the stationery manufacturer Plus Corp., has also worked on other design projects on the market such as the popular Air-In Fujisan Keshigomu eraser, which forms the shape of Mount Fuji after being used repeatedly.

As a student of the faculty of engineering’s design science department, Motoki originally developed the bird dropping sticker as his graduation project, after he found his bicycle was soiled by a bird.

Motoki did some research. He toured areas around railway stations and shopping streets, where he knew he would find bird droppings.

It made him realize that the actual shape of bird plop is different from how people imagine it.

“The biggest discovery I made is that it is not important to faithfully reproduce a bird dropping, but instead create something more likely to trick viewers into thinking that’s what it is,” Motoki said.

He finished some sticker prototypes of various shapes and sizes, and used his friends as a focus group for the product. Their top choice became the final sticker design.

Motoki set his crowdfunding goal at 200,000 yen, but he managed to pull in 450,000 yen, more than double his initial target, during the campaign.

The anti-theft sticker is now available on a number of online sales sites, including Motoki’s own website.