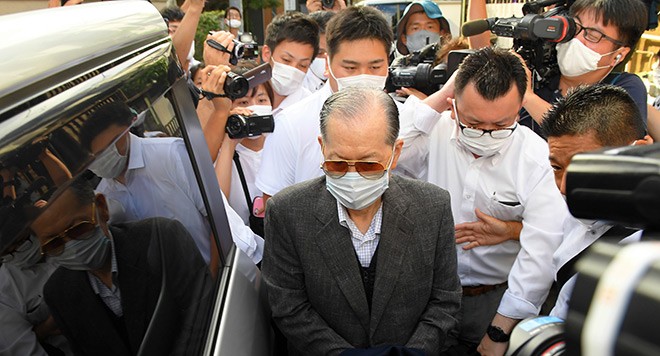 Police officers escort Takayoshi Yamaguchi from his Tokyo home on Sept. 18 after arresting him on suspicion of fraud. (Ryo Kato)

A former company chairman whose name was brought up in the cherry blossom party scandal was among 14 people arrested Sept. 18 on suspicion of defrauding investors in a wide-reaching scheme.

The now-bankrupt company, Japan Life, is believed to have collected a total of 210 billion yen ($2 billion) from about 10,000 investors around Japan.

The arrests concern about 80 million yen bilked from 12 individuals between the ages of 58 and 85, investigative sources said.

Takayoshi Yamaguchi, 78, former chairman of Japan Life, and 13 former executives, including his daughter, Hiromi, 48, who once served as company president, are accused of fraud.

Police officials did not divulge whether the suspects have admitted or denied the allegations.

The arrests are related to bogus sales pitches for magnetic medical products, the sources said, but the company was involved in such a wide range of activities that the investigation was carried out by Tokyo’s Metropolitan Police Department and five other prefectural police departments.

Japan Life was often on shaky financial ground, and its operations have long been considered dodgy.

The company was established in 1975, but its business practices were questioned in the Diet in the 1980s as being nothing more than a pyramid scheme.

From about 2003, it began luring potential investors by offering them ownership of the magnetic medical products, which could be rented out for returns on the investments.

The company said it would guarantee the principal amount and promised the investors annual returns of 6 percent.

But it turned out that Japan Life did not have enough magnetic medical products for the large number of contracts signed with investors, the sources said.

The sources said that between August and November 2017, Japan Life lied to potential investors about the guarantee and returns just to gain their funds and keep the company afloat.

Those who tried to get out of their investment contracts faced interference from the company, leading the Consumer Affairs Agency to issue four disciplinary rulings, including a temporary halt of operations, by the end of 2017.

At that time, Japan Life declared bankruptcy, and proceedings began in Tokyo District Court in March 2018. The company’s total liabilities came to 240.5 billion yen and the list of creditors ran to about 7,000.

When Yamaguchi was escorted from his Tokyo home by police on Sept. 18, he was asked by waiting reporters if he had anything to say to those creditors. He got into the police car without saying a word.

In April 2019, various police departments started their investigation because of suspicions Japan Life had continued to seek new investors although its liabilities exceeded its assets.

About 33 locations in 12 prefectures connected to the company were searched for evidence that the company failed to adequately inform potential investors about its true financial state.

The events were heavily criticized as a waste of taxpayer money and designed to reward supporters of Abe and other ruling party lawmakers.

In November 2019, reports said Yamaguchi used the invitation to the 2015 party to try to convince potential investors that his company was on solid footing.

The matter was taken up in the Diet. But Abe, in a December 2019 Upper House plenary session, denied knowing Yamaguchi personally.

In schemes similar to the one used by Japan Life, the company normally does not have enough products to enable all investors to become effective owners of the products.

The problem has become so extensive that the Consumer Affairs Agency in May 2020 decided, in principle, to ban the practice. The agency plans to submit legislation to next year’s ordinary Diet session to allow for enforcement.