Suga already being tested on his willingness to empower women 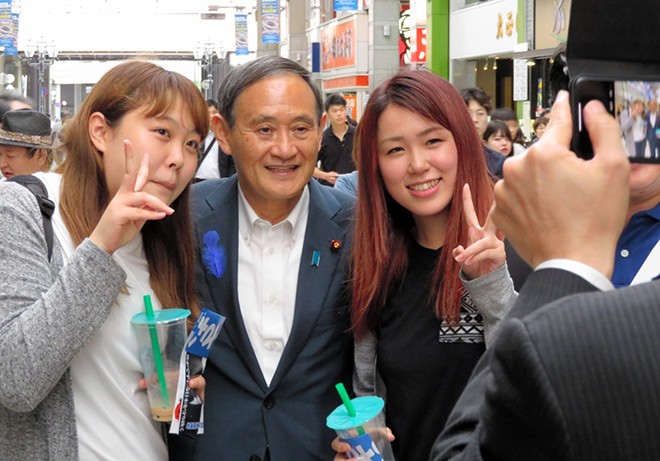 New Prime Minister Yoshihide Suga's commitment to empowering women is already facing a crucial test after he appointed only two female lawmakers to his Cabinet.

The lineup represents a decrease of one from the last lineup of his predecessor, Shinzo Abe.

In a Cabinet reshuffle in 2014, Abe appointed five female ministers.

One of the economic growth areas promoted by Abe early in his second nearly eight-year stint as prime minister was the empowerment of women in the workforce and political arena.

But Suga spoke very little about this policy area during the campaign for president of the ruling Liberal Democratic Party after Abe abruptly resigned for health reasons.

At this point, it is too early to gauge whether Suga will take up the baton of giving women a greater say.

In global terms, the situation in Japan is a woeful one.

A recent photo posted to Twitter symbolized the huge gap between Japan and Finland, for example.

The image showed Suga with four LDP executives. All five individuals in the picture were men in their 60s to 80s.

In contrast, Finland not only has a female prime minister, but more than 40 percent of its Cabinet ministers are women, as shown in the Twitter photo that showed five young women leading the nation.

As of January, Japan's ratio of female Cabinet ministers was 15.8 percent. That placed it in 113rd place in a comparative ranking compiled by the Geneva-based Inter-Parliamentary Union and UN Women. With the new Suga Cabinet, the ratio dropped to 10 percent.

A key and obvious reason for the low figure of female representation is the fact that female lawmakers make up only about 10 percent of Lower House members.

The low ratios of female ministers and lawmakers contributed to Japan being ranked 121st in a 2019 international study about gender gaps.

“There are increasing calls in Japan for women to play a more active political role and if those expectations are not seriously addressed, the support rating for the Suga Cabinet could fall,” noted Mari Miura, a professor of political science at Sophia University in Tokyo.

In his first news conference as prime minister on Sept. 16, Suga said he wanted to improve the situation in Japan so society is one in which “women can bear and raise children with peace of mind and where women can be active and healthy.”

He added that his administration would improve the availability of day care services so no children remain on waiting lists for such centers.

The Abe administration strove to reach a zero figure of children on the waiting list after a record 26,000 were on the list in 2017, but the number had only been reduced to 12,000 as of this past spring.

(This article was written by Sawa Okabayashi and Sachiko Miwa.)