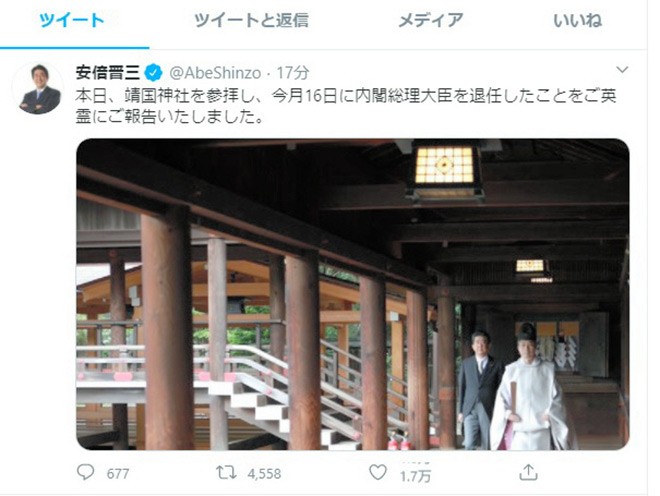 Shinzo Abe, no longer bound by the shackles of his position as prime minister, announced on social media Sept. 19 that he had visited war-related Yasukuni Shrine in Tokyo.

A visit by Abe on Dec. 26, 2013, about a year after he started his second stint as prime minister, triggered such an uproar from China and South Korea as well as an expression of disappointment by Japan’s key ally, the United States, that Abe never again visited the shrine while he was the nation's leader.

But Abe, who was replaced Sept. 16 by Prime Minister Yoshihide Suga, had no qualms about posting on his Twitter and Facebook accounts a photo of himself walking in the interior of Yasukuni Shrine accompanied by a shrine priest.

He also posted the message, “Today I prayed at Yasukuni Shrine and reported to the spirits of the war dead that I stepped down as prime minister on Sept. 16.”

The Twitter post was sent at about 10 a.m. on Sept. 19, so he likely visited the shrine located in Tokyo’s Kudan district earlier that morning.

While Abe only once visited Yasukuni as prime minister, he did make a ritual offering of “tamagushi-ryo” to pay for a branch of a sacred “sakaki” tree every Aug. 15, when Japan marks the end of World War II with its surrender.

He also offered sakaki branches at the spring and autumn festivals held at Yasukuni.

Due to the delicate nature of such offerings, Abe always used his position as president of the ruling Liberal Democratic Party, not as prime minister, in making the offerings.