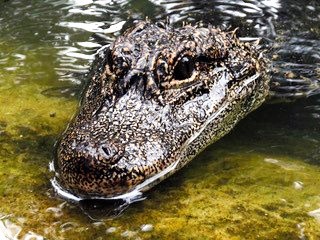 A Chinese alligator, similar to the one used in an Ig Nobel Prize-winning research project (Provided by Jim Darlington)

For the 14th straight year, a Japanese has clinched a parody version of the Nobel Prize.

Nishimura only learned he won when he received an e-mail marked emergency matter from another member of the prize-winning team, Stephan Reber, a doctoral researcher at Lund University in Sweden.

The Ig Nobel Prize is annually announced at Harvard University, but this year’s ceremony was held online on Sept. 17 due to the novel coronavirus pandemic.

Nishimura's research was designed to determine if alligators emit sounds in a similar manner to mammals and birds. The results of his research were published in a British scientific journal in 2015.

Helium inhaled along with oxygen changes a human’s voice so the gas is frequently used as a gag gift.

Mammals and birds emit sounds much like wind instruments through resonance in their vocal tract. When helium enters the picture, the sound is transmitted faster than through ordinary air, accounting for the change to a higher sound.

While it remains unclear how alligators emit sound, the process is thought to be similar to percussion by which sound is emitted by directly vibrating the air. Alligators emit a sound similar to that made by drums.

For the experiment, an alligator was placed in a covered aquarium and some of the water was removed. Helium gas mixed with oxygen was injected into the aquarium to see if the sound emitted would change. If it did not, that would be evidence that the alligator did emit sounds like a percussion instrument.

But the research team found the sound did, in fact, change, meaning alligators had a similar method for emitting sound as humans.

“The fact that the alligator had a similar sound emission method as birds leads to the idea that maybe dinosaurs also had a similar method,” Nishimura said.

The place of dinosaurs in the evolutionary process is thought to have been somewhere between reptiles and birds.

Nishimura explained he was asked to analyze the voice of the alligator because of research he conducted in 2012 using helium gas to assess the effect on sounds emitted by gibbons.

“In 2012, I was interviewed by a science magazine and told, ‘Your research is worthy of an Ig Nobel Prize,’” Nishimura recalled with amusement.