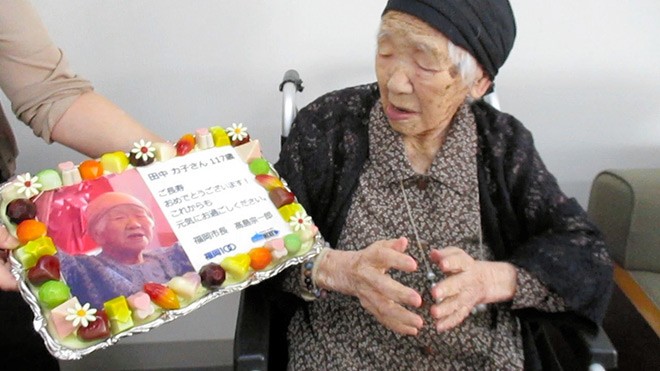 Kane Tanaka receives a celebratory message made of chocolate ahead of her breaking the record for oldest Japanese. (Provided by Fukuoka city government)

FUKUOKA--It seems fitting that two days ahead of Respect-for-the-Aged Day, a national holiday, a woman in Fukuoka has broken the record for oldest Japanese.

Based on records confirmed by officials of the Ministry of Health, Labor and Welfare, the oldest Japanese until now was Nabi Tajima, who lived for 117 years and 260 days before she died in 2018.

Tanaka lives in a nursing home here. According to relatives, she is determined to live to celebrate her 120th birthday.

In March 2019, she was certified by Guinness World Records as the world’s oldest person.

Tanaka’s favorite foods are chocolates and carbonated beverages. She  passes her time playing the Othello board game with fellow residents.

According to Fukuoka city government officials, when Tanaka was presented this month with a celebratory message made of chocolate as well as a bouquet of flowers, she said that she would make every effort to continue living.

She also took part in the banzai cheer made on her behalf.