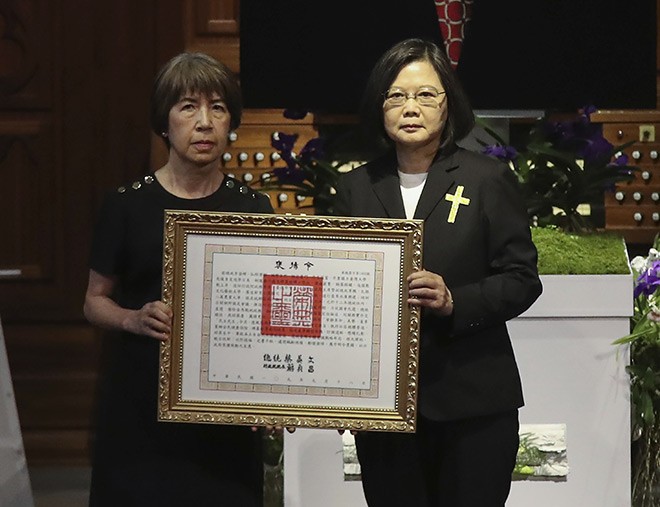 Taiwan President Tsai Ing-wen at right presents a posthumous citation for the late Taiwanese President Lee Teng-Hui to his daughter Anna Lee, during a memorial service for the former president in Taipei, Taiwan on Saturday, Sept. 19, 2020. Lee, remembered for leading the island's transition to democracy, died at age 97 in July, (Pool Photo via AP Photo)

TAIPEI — Taiwan President Tsai Ing-wen said on Sunday that there was no plan for her talk by telephone with new Japanese Prime Minister Yoshihide Suga, after a Japanese envoy had told Tsai that Suga might be open to it, prompting concern in Beijing.

Taiwan, claimed by China as its own territory, has close cultural and historic ties with Japan, though Japan, like most countries, recognises China's government in Beijing, not Taiwan's.

Meeting Tsai in Taipei on Friday, former Japanese prime minister Yoshiro Mori, visiting for a memorial service for late president Lee Teng-hui, said Suga told him that "if there is the opportunity, he hopes to speak by phone or other means."

China's foreign ministry said late on Saturday that Japan had told them such a thing "will never happen," after Beijing sought clarification from Tokyo.

Tsai told reporters that she did not talk about this issue with Mori. "We also don't have this plan at the moment to have a telephone conversation," she said.

A spokesman for Japan's foreign ministry echoed Tsai's comments, saying "there is no plan for a telephone call" between the two leaders.

Japan cut diplomatic ties with Taiwan in favour of China in 1972. Taiwan was a Japanese colony between 1895 and 1945.

Unlike in China or South Korea, many Taiwanese have a broadly positive view of Japan, saying that Japan's rule brought progress to what was an undeveloped, largely agricultural island.

Separately on Sunday, Tsai said recent approaches to Taiwan by Chinese aircraft show Beijing is a threat to the whole region.