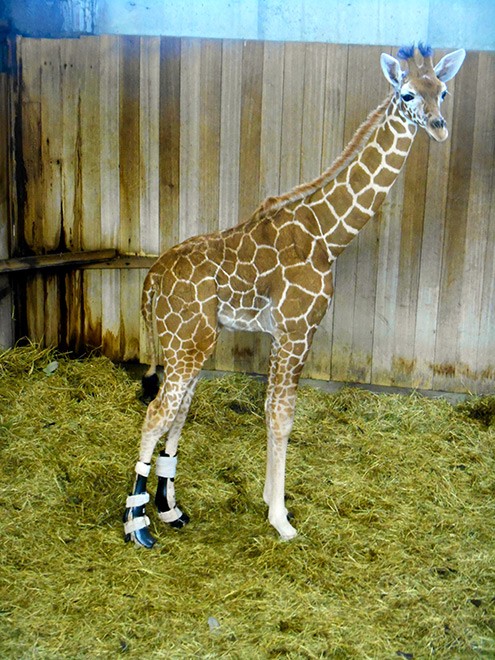 Born at the Asa Zoological Park here this spring, the reticulated giraffe is now walking longer distances each day as her keepers work on her gait training.

Eventually, they hope the giraffe will be able to walk without the devices.

The calf was born to father Ibuki and mother Megumi. Shiho Domen, 30, a breeding technician in charge of giraffes, named her Hagumi, hoping that she would be full of life and grow up healthy.

When Megumi's due date was getting close, Domen and other staffers set up a video camera to prepare for the delivery.

But when Domen went into the breeding room on the morning of April 9, she found the calf already crouched on the ground.

Its skin was dry, meaning it had been born several hours before. The video cable was found disconnected.

Giraffe calves normally manage to stand up within an hour or so after they are born. But Hagumi remained sitting. Domen found her hind legs bent at odd angles.

A veterinarian rushed over for a medical checkup to find that the tendons were overstretched, preventing the calf from stretching its hind legs.

Hagumi had casts fitted to her legs for the first one to two months, but still seemed to have difficulty standing up.

She also seemed to be in pain when the casts were broken as she gained weight.

The zoo's vice director sought advice from Tetsuo Yamada, an instructor at Hiroshima International University's Faculty of Rehabilitation. He usually teaches students how to produce prosthetic limbs for people with disabilities.

Thanks for the special harnesses he produced, Hagumi gradually became able to put her weight on her legs and take tentative steps.

Initially, she underwent gait training for 30 minutes, but by the end of July was practicing walking for at least one hour.

"I feel happy every time I see her walking," Domen said with a smile. "She still seems to be nervous when she walks, but she appears to be at ease when she is with her mother."

Yamada, 53, had experience in producing harnesses for dogs, but his skills were tested when it came to making a device for a giraffe.

Yamada shot videos of Hagumi in May and went through many prototypes as he continued discussions with zoo staffers and referred to deer skeletal specimens.

The harnesses have gone through several versions, with the current design being the fourth generation.

Yamada now visits the zoo once every two weeks with his students to see how Hagumi is doing.

"I have been feeling my way through the project, but I'm happy that things are going smoothly so far," Yamada said.

"I find it rewarding, and so do my students who can't receive regular hands-on practice due to the coronavirus pandemic."

Visitors can now see for themselves the progress Hagumi is making at the zoo when the weather is good and if her physical condition allows. She appears at different times depending on the day.

"I hope visitors support Hagumi and watch over her," Domen said.