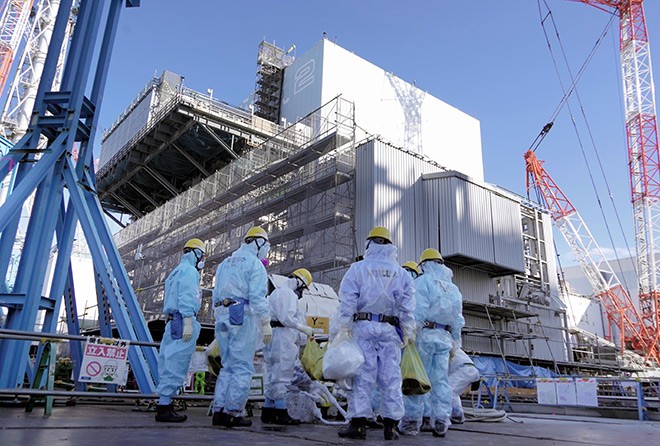 In his inaugural news conference, Prime Minister Yoshihide Suga listed many policy challenges that he faces but left out one important issue.

He did not touch on how to rebuild areas devastated by the 2011 earthquake, tsunami and nuclear disaster.

The issue was also left out from his Cabinet’s basic policy, which has been approved at a Cabinet meeting.

What happened to the government’s slogan of “No regeneration of Japan without Tohoku reconstruction?” And what will become of the disaster-hit areas under the leadership of a prime minister who cites self-help as the most important principle?

The inauguration of the Suga Cabinet has provoked doubt and anxiety about the future of the Tohoku region.

The Abe administration ramped up government spending on rebuilding measures during the five years after the disaster to 25 trillion yen ($240 billion) from 19 trillion yen.

Generous public-works outlays continued, and infrastructure projects will be largely finished by the end of the current fiscal year.

But only around 10 percent of the total amount of public funds has each been spent to restore local industries and support the livelihoods of victims.

Many newly developed housing plots have remained vacant because plans were not adjusted for the decline in population. About 30 percent of the elevated land for building homes, made available under “land readjustment projects,” is left unused.

In some areas, residents have been bitterly divided over the sturdiness of planned seawalls.

In a government survey of businesses that received subsidies to repair or replace damaged facilities and equipment, 46 percent of respondents said their sales had recovered to pre-disaster levels.

However, there are wide gaps among industries. In the construction industry, which has benefited from public works spending, 74 percent said their sales had recovered, while the figure was 32 percent for the fisheries and food processing industry.

In many areas of the Tohoku region, local businesses have joined hands for “self-help and mutual help” to develop products and promote sales under unified brands.

But the novel coronavirus pandemic has made it difficult to hold exhibitions or meet with potential customers in the Tokyo metropolitan area and other markets. The government needs to provide continuous policy support.

The list includes: how to dispose of contaminated soil and radioactive water accumulating at the crippled Fukushima No. 1 nuclear power plant; how to lift the designation of “difficult-to-return” zones; and how to rebuild communities when only 30 percent of former residents have returned after evacuation orders were lifted.

Lawmakers are also responsible for providing both material and moral support for people who are still forced to live as evacuees.

For the reconstruction of disaster-hit areas, political leaders must maintain sympathy and not forget the victims’ suffering.

In the Abe Cabinet, however, some members made outrageous remarks that contradicted its slogan of “All Cabinet members are in charge of reconstruction.”

One said, “Luckily, it was the Tohoku region (that was hit by the disaster),” while another said, “A Liberal Democratic Party lawmaker is more important than reconstruction.”

The phrase “reconstruction Olympics,” which was often used for Tokyo’s bid to host the 2020 Summer Games, is seldom heard these days.

How will the new prime minister protect the livelihoods of residents of areas that long supported the prosperity of urban centers before they were struck by an unprecedented calamity?

Suga has said, “A desire to cherish and revitalize provinces has been consistently running strong inside me.”

He will be tested on whether he is committed to his words.