Those aged 65 or older account for record 28.7% of the population 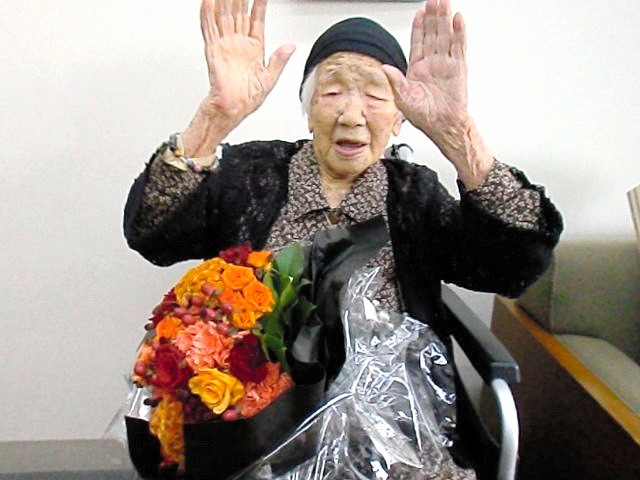 Kane Tanaka, a 117-year-old resident of Fukuoka is Japan's oldest person on record. (Provided by the Fukuoka city government)

Japan's rapidly aging society now has a record 36.17 million people aged 65 or older, up by 300,000 from a year earlier and accounting for 28.7 percent of the overall population, another record, government statistics show.

The percentage of people in this age group is the highest among the world’s 201 countries, regions and territories, followed by Italy’s 23.3 percent and Portugal’s 22.8 percent.

The share of people aged 70 or older represents 22.2 percent of the total population.

One in four women, or 25.1 percent of all females in Japan, fall into this age bracket, the first time the percentage has exceeded 25 percent.

The estimated figures, based on data as of Sept. 15, were released by the Ministry of Internal Affairs and Communications to coincide with Sept. 21, Respect-for-the-Aged Day, a national holiday.

There are 20.44 million women aged at least 65, accounting for 31.6 percent of the female population.

The figure show that 15.73 million men fall into this age bracket, representing 25.7 percent of the male population.

As the country grays, it is seeing growing ranks of people aged 65 or older remaining in the workforce.

The number of such people totals 8.92 million, an increase for the 16th consecutive year and a new high.

The share of workers aged 65 or older accounts for a record 13.3 percent of the country’s entire workforce.

Of workers in that age group, 5.03 million are in rank and file jobs. Of that number, 77.3 percent are nonregular employees.

Asked about why they chose that work style, the most common answer for both men and women at more than 30 percent each was that they want to work for hours that are convenient for them.

According to the ministry’s projections, the percentage of people aged 65 or older will continue to rise in the years ahead.

The government is promoting a policy of retaining senior citizens in the workforce as it pushes ahead with reforming the nation’s social security system by 2025, when people in the first baby boom generation turn 75 or older.