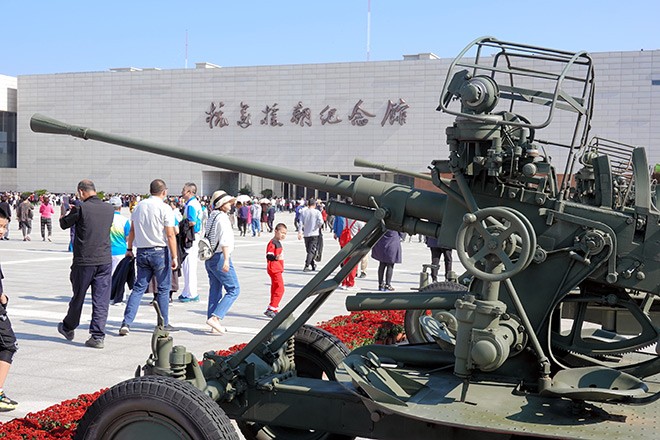 DANDONG, China--A long-closed memorial hall commemorating the blood ties between China and North Korea forged by the Chinese People’s Volunteer Army’s participation in the Korean War (1950-53) is open to the public again.

The development is a clear sign that relations between the two countries are on the upswing after a sharp cooling off period.

Chinese forces rushed to assist North Korea to fight against U.S. and other troops in the war that left the Korean Peninsula divided.

For the Chinese government, the memorial hall in Dandong, Liaoning province, symbolizes what is often termed the “blood alliance” between the two neighbors.

But as the relationship soured over the years, the facility closed six years ago for “renovations.”

This year marked the 70th anniversary of the start of the war. On Sept. 20, renovated memorial hall reopened to the public.

A new facility, four times bigger than the previous one, occupies the 182,000-square-meter site.

Exhibits on display inside the hall as well as in an outdoor square include weapons, tanks and fighters used in the war. The number of items markedly increased compared with pre-renovation times.

A large line of people who had made reservations to view the facility formed for the museum's 9 a.m. opening.

The memorial hall initially opened in 1958.

When it was relocated to its current site here in 1993, the late paramount leader Deng Xiaoping wrote the lettering on a 53-meter-high memorial tower.

Jiang Zemin, the next supreme power of China, also inscribed a few words. Hu Jintao, who was regarded as a future leader of the nation, attended the ceremony as well.

At the end of 2014, the Chinese government announced that the memorial hall would close for renovations.

The renovations were almost complete in 2018 when North Korean leader Kim Jong Un made a visit to China. The museum has since begun accepting students who visit for educational programs and other purposes. But access by the public was not granted until now.

China in October will celebrate the anniversary of the Chinese People’s Volunteer Army joining the fighting in the Korean War. A commemorative movie will be shown. Other activities are also planned to reflect heightened interest in China in the war.