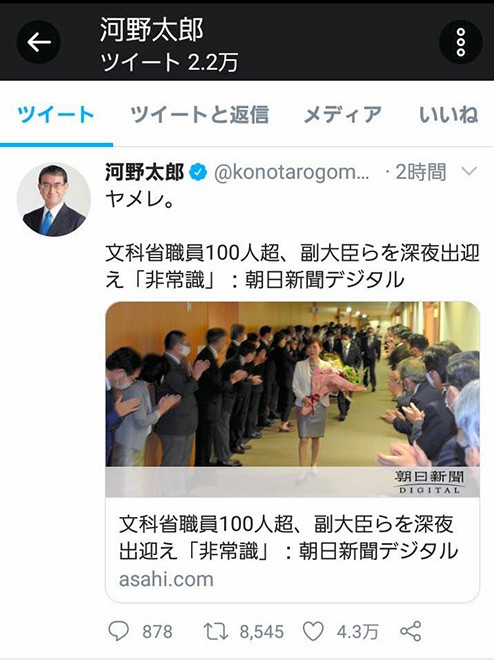 More than 100 bureaucrats at the education ministry were still burning the midnight oil on Sept. 18, but not because all of them wanted to. Most felt obligated to be on hand to greet two vice ministers and two ministerial aides newly coined by the Suga administration.

Despite central government efforts to get its own apparatus as well as industry organizations to drastically “reform ways of working,” such as cutting overtime hours, the ministry decided to go against the policy simply to greet the four with applause and bunches of flowers on their “first day at work.”

It explained that it is “customary practice” to do so, but not many of those still working were not convinced.

The two vice ministers attended an attestation ceremony held at the Imperial Palace from 6 p.m. on Sept. 18. They then joined a meeting of vice ministers.

They arrived at the Ministry of Education, Culture, Sports, Science and Technology just before 10 p.m.

Ministry officials lined up in a hallway that leads to their offices to offer greetings and a loud clapping of hands that was capped by a presentation of a bouquet.

The two ministerial aides arrived before 11 p.m. on Sept. 18 and received the same welcome.

The four held a news conference starting at 11:45 p.m. Bureaucrats meantime were preoccupied with responses to the customary practice until the predawn hours.

Taido Tanose, a Lower House member and one of the newly appointed vice ministers, asserted that starting his “first day at work” so late was actually beneficial for those who stayed behind.

“Doing this at the end of the day means they can start working on new things in the coming week,” he said.

However, Tanose added that as long as the central government pushes work practices reform, “I want to reform things that needs to be reformed.”

The Cabinet Secretariat has urged all ministries and agencies to designate at least one month during the period from July to September to enhance and strengthen reform of working practices. The campaign is currently under way at the education ministry.

“It’s absurd,” said one bureaucrat. “Seriously, are we expected to stay all hours of the night for something like this?”

At other ministries, such as the land and economy ministries, newly appointed vice ministers and ministerial aides are expected to start work on Sept. 23 after a four-day holiday weekend.

Many people on Twitter criticized what they viewed as the anachronistic practice and accused the education ministry of hypocrisy in light of the fact it is leading the charge for the reform of working practices among teachers.

Author Keiichiro Hirano posted on Twitter, “It is not good for children’s educational purposes.”

Shinichi Isa, a Lower House member of junior ruling coalition partner Komeito who used to work at the ministry, tweeted: “This is so unfortunate. It's all due to a lack of awareness among politicians.”

Kono also fumed about another customary practice whereby all newly inaugurated Cabinet members take the podium to speak to reporters by rotation at the prime minister’s office during the period from midnight to the predawn hours.

“It is a prime example of precedent-based principles, vested interests and authoritarianism,” Kono said at his own inaugural news conference held Sept. 17. “They should put a quick end to it.”

(This article was compiled from reports by Kazuyuki Ito, Yu Kamata and Junya Sakamoto.)