Suga takes over tough diplomatic challenges left by his predecessor 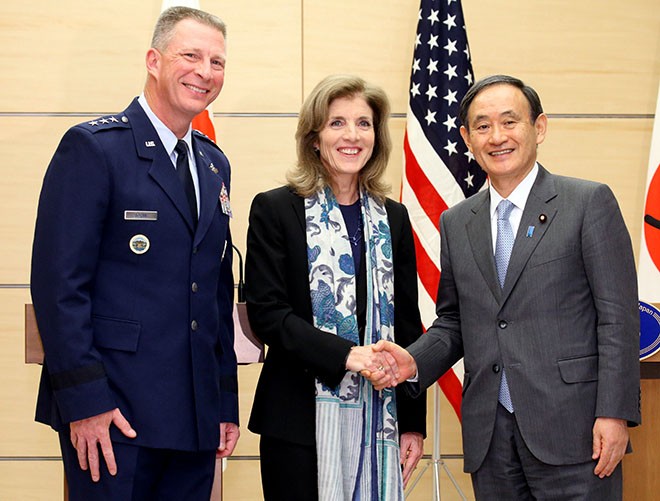 Prime Minister Yoshihide Suga is considered untested in terms of foreign policy, but government insiders note that he has experience in diplomatic issues.

For example, he developed close ties with all U.S. ambassadors posted to Tokyo in his seven years and eight months as chief Cabinet secretary.

Also under his predecessor, Shinzo Abe, Suga held the Cabinet portfolio of state minister in charge of mitigating the impact of U.S. forces in Okinawa Prefecture. In that role, he pushed for the return of some of the land used by the U.S. military in the southernmost prefecture for its Northern Training Area.

In addition, Suga handled the purchase of a large part of uninhabited Mageshima island south of Kagoshima Prefecture for the eventual landing and take-off training exercises by planes attached to U.S. aircraft carriers.

Based on such past work, a high-ranking government official said, “The United States considers Suga a politician who keeps his word.”

Suga has made clear that he would emphasize the alliance with the United States, much like Abe did.

But a major issue facing the Suga administration from this autumn will be negotiations with Washington on host nation support for the U.S. military.

The agreements are reviewed once every five years, and U.S. President Donald Trump has repeatedly said he wants U.S. allies to shoulder a greater burden of the costs of stationing U.S. troops.

Suga could face a very pressing matter early on depending on the outcome of the U.S. presidential election in November.

While Abe developed a close personal relationship with Trump, Suga has just gotten to know the U.S. president.

The planned state visit to Japan by Chinese President Xi Jinping has been postponed because of the novel coronavirus pandemic, and there is still no telling when the visit may be rescheduled.

A government source said Takaya Imai, a former economy ministry bureaucrat who served as executive secretary under Abe, was largely responsible for the balance in relations with China.

Imai pushed for improving economic ties with China even as Abe sought a harder line position due to his conservative leanings.

But Suga did not keep Imai in that position.

He did, however, retain Toshimitsu Motegi as foreign minister. A high-ranking government official said that decision shows the initiative on foreign affairs will likely return to the Foreign Ministry rather than the prime minister’s office as was the case under Abe.

Still, Suga will likely maintain the emphasis on stronger economic ties with China because he was a prime proponent as chief Cabinet secretary of pushing for larger numbers of inbound foreign tourists to Japan.

In other areas, Suga will have to deal with issues left over from his predecessor, such as the lawsuits brought by Korean wartime laborers seeking compensation from Japanese companies, as well as negotiations with Russia over the Northern Territories, four islands located off the coast of Hokkaido that were seized by Soviet forces at the end of World War II.

A national security issue handed down to Suga concerns whether Japan should possess the ability to launch pre-emptive strikes on enemy missile sites.

Just before stepping down, Abe released a statement asking that a conclusion be reached before the end of the year about the course of Japan’s national security direction, especially in connection with missile defense.

Some in the government believe the new prime minister will not be as keen as his predecessor about possessing that capability.

One high-ranking government official said Suga is a realist and might approve possessing first-strike capability if he feels there is a need for it.

On the other hand, Suga’s appointment of Nobuo Kishi as defense minister has led some to believe that the prime minister would continue with the national security policy of his predecessor.

Kishi is the younger brother of Abe but was adopted by the Kishi family as a young child. Kishi in the past has said that discussions could be held on whether Japan should possess first-strike capability.

Kishi is also known for his pro-Taiwan views, and his appointment may have raised alarms among Chinese officials.

Wang Wenbin, a Chinese Foreign Ministry spokesman, said at a Sept. 16 news conference, “We hope Japan will abide by the ‘one China’ principle and avoid having mutual official visits with (Taiwanese) government officials.”

(This article was written by Yuki Nikaido, Hideki Kitami and Daizo Teramoto in Tokyo and Takashi Funakoshi in Beijing.)