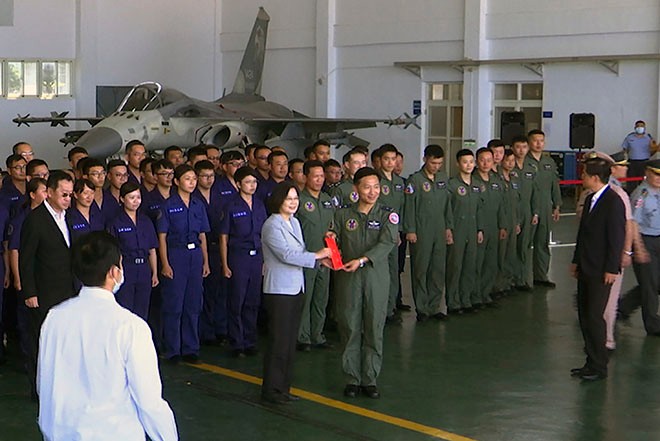 PENGHU, Taiwan--Taiwan’s President Tsai Ing-wen visited a military base on one of Taiwan’s outlying islands Tuesday in a display of resolve following a recent show of force by rival China.

Tsai spoke to roughly a hundred air force pilots and crew members at the Penghu Magong Air Force base, where two pilots took off in Taiwan-produced Ching-kuo Indigenous Defense Fighters to greet her arrival.

Taiwan has the “ability” and “resolve” to safeguard its territory, she said.

“I know that having to face the provocations of the People's Liberation Army surrounding Taiwan, and their actions in disturbing the area’s peace, in the situation, everyone’s duty at the frontline air defense at Penghu has become heavier,” Tsai said.

“But I have faith in every individual, that every one of our well-trained air force brothers and sisters is able to lift this heavy responsibility,” she said.

The Chinese air force flew 37 planes, including fighter jets and long-distance bombers, over the Taiwan Strait on Friday and Saturday in what Beijing called a deliberate warning during a visit by a high level U.S. State Department envoy to the island.

China considers Taiwan part of its national territory and objects to all official contact between other countries and Taipei.

China has increased its diplomatic and military pressure on Tsai's government over her refusal to agree to China's insistence that the island be considered a part of Chinese territory. The vast majority of Taiwanese reject the prospect of political union with China under the “one country, two systems" framework in place in Hong Kong.

While China's armed forces have an overwhelming numerical advantage over Taiwan, the island's small but well-trained high-tech force enjoys strong support from the U.S., the island's chief ally.