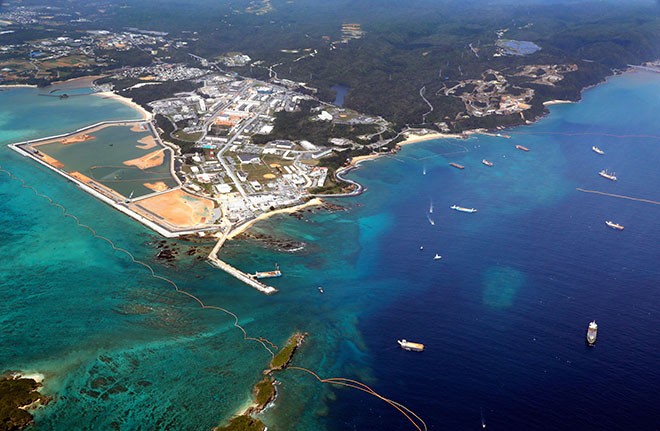 Land reclamation work continues off the Henoko coast of Nago, Okinawa Prefecture, for the construction of a replacement facility for the U.S. Marine Corps Air Station Futenma. (Eiji Hori)

NAHA--The central government plans to extract so much sand to continue a contentious land reclamation project for a U.S. military base that alarm bells are now ringing about the likely adverse affects the move will have on Okinawa Prefecture's marine environment.

Documents submitted by authorities in Tokyo to the prefectural government here call for using about 3.49 million cubic meters of ocean sand over a four-year period to reinforce the soft seabed off the coast of the Henoko district of Nago.

Under initial plans, it was envisaged that around 580,000 cubic meters of sand would be needed to complete the project that is fiercely opposed by a majority of Okinawa's residents.

In addition, another 380,000 cubic meters or so of sand would be required over a six-year period to construct a seawall around the Henoko site that will serve as a replacement facility for the U.S. Marine Corps Air Station Futenma currently located in the heavily populated city of Ginowan.

In total, the volume of sand to be used would be close to a seven-fold increase from initial estimates.

Not only would such a massive extraction adversely affect the marine ecosystem, but it potentially could have a disastrous effect for the southernmost prefecture which prides itself on its beaches.

The documents have been submitted for an application to change the design of the site following the discovery that the seabed is as soft as mayonnaise.

The application also states that the sand could be secured entirely from within Okinawa Prefecture.

The loss of large volumes of sand altered the layout of the seabed and caused ocean currents to change, leading to the destruction of seaweed beds that small fish used to inhabit.

That in turn had a dramatic impact on the livelihoods of local fisherman as fish stocks such as sea bream and rockfish that fed on the small fish dropped off.

While the Okinawa prefectural government does not have an ordinance that bans the extraction of sand, there are limits to the areas and volume that can be taken.

That led to the use of about 3.71 million cubic meters of sand over a five-year period for land reclamation work to build a second runway of Naha Airport that began operating from March.

Kunitoshi Sakurai, professor emeritus of environmental studies at Okinawa University, pointed to the current situation in Okinawa, which is left with developing the coastline because the best property has already been taken by the U.S. military.

“A large volume extraction of sand will reduce the sandy beaches that are a tourism resource for Okinawa and it will surely have an effect on the ecosystem,” Sakurai said. “That is why questions must be raised about whether the move is really needed.”