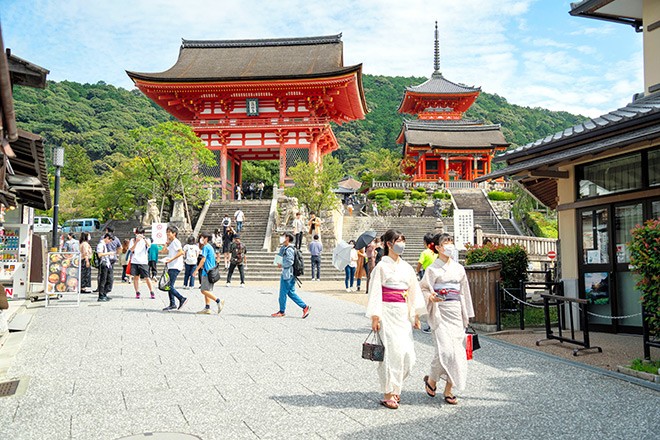 The tourism industry has been hard hit by the novel coronavirus pandemic, but visitors are starting to return to popular sightseeing spots. (The Asahi Shimbun)

The Suga administration says it will simultaneously fight the novel coronavirus pandemic and sustain socio-economic activities. But exactly how will this be achieved?

The administration should study the lessons learned and challenges experienced so far and share them with the public.

A resurgence of new COVID-19 cases from the latter half of June indicated the start of a “second wave” of the novel coronavirus pandemic.

But after peaking around the end of July, new infections started falling, and there have been fewer deaths and severe cases than during the wave between March and May.

Lately, however, the decline in new cases has slowed down, and that calls for continued vigilance.

During the second wave, there was no declaration of a state of emergency. Instead, prefectural and regional COVID-19 response measures have been implemented, asking local businesses to remain closed and residents to refrain from traveling.

Questions remain on whether authorities failed to act faster to better contain the virus. But ultimately, the spread of infections was kept under control, and there arose no need to restrict socio-economic activities as severely as in April and May.

We believe much of that owed to the efforts and accumulated experiences of front-line health care workers, epidemic control experts and people in many other sectors.

That said, however, the pandemic has had a severe impact on the economy.

Household consumption, which recovered in June to year-earlier levels, fell again in July. Industrial production, albeit on track to recovery, remains at quite low levels. Declines in employment are still sharp, particularly among nonregular workers.

The nation’s gross domestic product in the April-June period dropped by 7.9 percent from the previous quarter. An improvement is expected in the July-September period, but many economists say only about half the margin of loss incurred in the previous quarter will be recovered.

The economy is expected to keep fluctuating if infections continue to return in waves.

The experiences during the second wave showed that if the reinforcement of health care and infection control is one wheel of a cart, the recovery of economic activities forms the other.

A spread of infections slows down the economy. Both wheels need to be gradually raised to higher levels while maintaining a good balance. Should the equilibrium be lost, a flexible correction of the course is necessary.

The government must examine both the good and bad results of the economic measures taken, work out its strategy and present its policy direction at an early date.

Basically, this calls for sustaining the recovery of the macroeconomy while focusing on the needs of hard-hit sectors.

We believe the overall framework of the nation’s monetary and fiscal policies should remain unchanged.

Still, as the crisis drags on and the pace of recovery is uneven, the government must figure out case-by-case corrective measures.

In particular, close attention should be paid to workers whose lives have been severely affected by the shrinking economy.

Further, we need to reduce uncertainty of what lies ahead and stimulate proactive economic activities. Studies are needed for that purpose concerning the conditions and means for bringing “normalcy” back to society.

The Japanese economy was in a continued decline even before the pandemic hit, and there were already mountains of problems.

The Suga administration needs a mid- to long-term perspective, even as a way to deal with immediate problems.