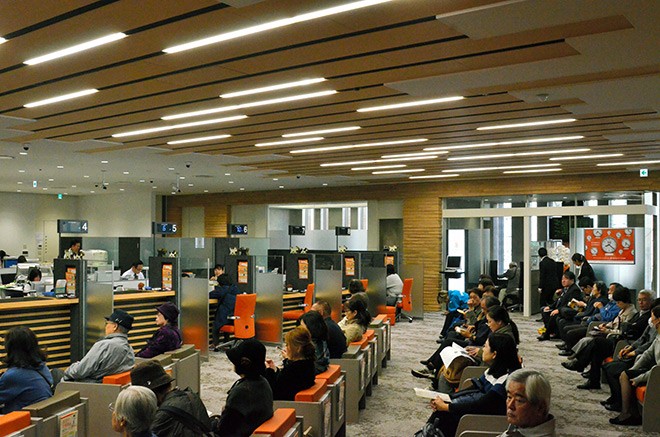 A bank based in Fukuoka Prefecture. Some regional banks are moving away from overseas remittance services due to growing costs for safeguarding against possible money laundering. (Asahi Shimbun file photo)

Japanese regional banks are responding to rising costs for anti-money laundering measures with fee increases, or by curbing or even ending their overseas remittance services altogether, with a number currently mulling over service changes.

Three banks have withdrawn from services to transfer money to bank accounts overseas, while one has scaled them back, according to a joint survey by The Asahi Shimbun and Kyodo News. Two banks are considering shuttering the services, while eight are seeking to curtail the services, the survey found.

The security measures are designed to detect and stop transactions that make dirty money appear legitimate, but the banks are finding it increasingly burdensome to maintain such a high level of vigilance.

The findings come as banks around the world step up their anti-money laundering measures and amid heightened scrutiny over whether those steps are adequate.

According to the survey, 63 banks--mostly regional ones--have raised commission charges over the past five years for sending money to overseas bank accounts.

One bank based in the Kanto region nearly doubled its charges to 8,000 yen ($76) from 4,500 yen, citing growing costs for anti-money laundering measures.

The survey found that all of the 105 banks offering overseas remittance services said they decline to serve customers who bring in cash to transfer into overseas accounts, rather than using their bank accounts.

A bank headquartered in the Tohoku region said it is considering scaling back overseas remittance services because maintaining and updating its system causes tens of millions of yen in losses each year.

Related costs also quickly add up for obtaining information on terrorists and crime syndicates, and paying for personnel to comb through the large number of transactions to search for irregularities, according to a bank official.

The Financial Action Task Force, an international organization, indicated in 2008 that Japanese banks were behind in their anti-money laundering measures.

That still appears to be a problem today.

In the survey, 15 banks replied that they are fully prepared against money laundering. But 80 percent of the banks expressed varying degrees of anxiety about their safeguards.

The joint survey was done in connection to a major investigation by an international group of journalists into top-secret bank reports filed with the U.S. Treasury Department’s intelligence unit, the Financial Crimes Enforcement Network (FinCEN).

The investigation was carried out by the International Consortium of Investigative Journalists (ICIJ), BuzzFeed News, Kyodo News, Radio France, The Asahi Shimbun and 105 other media partners.

(This article was written by Hiroki Koike, Shuhei Shibata and Yoshihiro Sakai.)