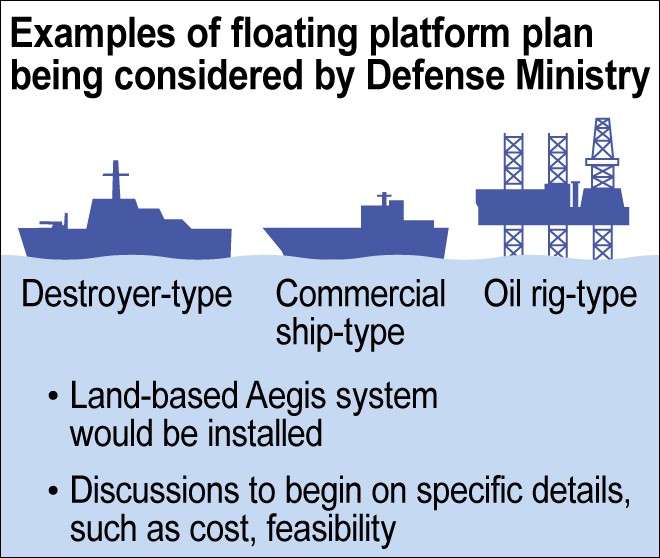 The Defense Ministry is pushing the idea of deploying a missile-defense system on a floating platform that will use the radar and other equipment from the now-abandoned land-based Aegis Ashore project.

Ministry officials have come up with three options for the platform: a destroyer, a large commercial ship or an oil rig. The options will be presented to ruling coalition lawmakers as early as this week.

After the government in June decided against deploying the U.S.-made Aegis Ashore system over safety and other concerns, ministry officials scrambled to find an alternative way to protect Japan from missiles fired by North Korea.

Some ministry officials prefer the floating platform idea because it could be equipped with components of the Aegis Ashore system, allowing Japan to avoid breaking its contract with the United States and paying a penalty.

But there are concerns over whether the transplanted system will provide the seamless, around-the-clock protection against North Korean ballistic missiles that had been a selling point for the Aegis Ashore system.

Weather conditions and maintenance of equipment out at sea could make it difficult to keep the missile defense system operational at all times.

In addition, having the missile defense system aboard a floating platform would be an unprecedented move that could lead to massive outlays.

According to several government sources, the Defense Ministry will request a record amount in excess of 5.48 trillion yen ($52 billion) in the fiscal 2021 budget. That amount would not include any related expenses for an alternative to the Aegis Ashore system, meaning the final figure could be even greater.

If the ministry decides on the floating platform option, it would not only have to buy a ship or oil rig but will also need funds for retrofitting. If a ship is used, maintenance costs will also be high.

The ministry will hold further discussions on the expenses and feasibility of the floating platform option. A final decision on a replacement for Aegis Ashore is expected by the end of the year.

Defense Ministry officials had presented three possible replacements to lawmakers of the ruling Liberal Democratic Party, including a megafloat or man-made island to house the radar and other equipment, or increasing the number of Maritime Self-Defense Force destroyers equipped with Aegis capability.

A third possibility was to install the radar on land while having the launch mechanism for the interceptor missiles on a ship.

But the third option was rejected because of technological problems in maintaining a secure communication link between land and ship.