Many sightseeing spots around the country bustle with tourists on Sept. 22, the final day of a four-day holiday weekend. (Masahiko Endo and Hisanori Kanaya) 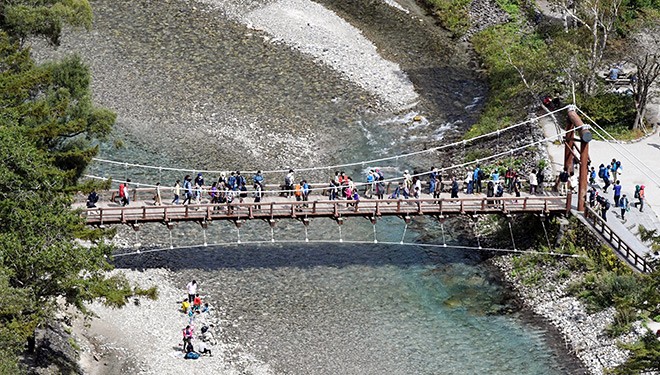 Hikers and families cross the Kappabashi bridge in Kamikochi, a gateway to the Northern Japan Alps, in Matsumoto, Nagano Prefecture, during fine weather on Sept. 22. (Kazuyoshi Sako)

Kamikochi, a mountain resort area and gateway to the Northern Japan Alps in Matsumoto, Nagano Prefecture, was bustling with tourists again during the four-day holiday weekend that ended on Sept. 22, a sharp contrast with spring, when visitors were scarce.

Hikers and families one after another crossed the Kappabashi bridge, a popular spot offering a view of the ridges of the Hodaka mountain range in the Kamikochi area during the break, which was blessed with fine weather.

Visitors to Kamikochi had plunged to about 20 percent of the level recorded a year earlier as of the end of August due to the COVID-19 pandemic, and an earthquake swarm that hit the area in late April, according to the Kamikochi branch of the Natural Parks Foundation.

But during the four-day weekend, the number of daily visitors likely rose to about 90 percent of last year’s level, the branch said.

Pedestrian traffic in the late afternoon on Sept. 21, the third day of the holiday, still fell below the average weekend foot traffic for September 2019 in most areas nationwide, according to an analysis of smartphone location data by Softbank Group Corp. affiliate Agoop Corp.

While the latest figure also failed to reach the level seen just before the state of emergency over the pandemic was declared on April 7 at about half of the locations across the country, it surged in some areas.

At 3 p.m. on Sept. 21, New Chitose Airport Station in Hokkaido and Tokyo’s Asakusa Station each saw about 1.5 times more pedestrians than during the same period on April 7.

Foot traffic also increased about 2.1 times around Motomachi-Chukagai Station in Kanagawa Prefecture and about 6.5 times in the Yumoto district of Hakone in the same prefecture. Hakone is famed for its onsen hot spring resorts.

Compared with September last year, foot traffic jumped about 1.3 times in the Yumoto district and about 1.2 times in the Arashiyama district.

(This article was written by Nen Satomi and Mutsumi Mitobe.)