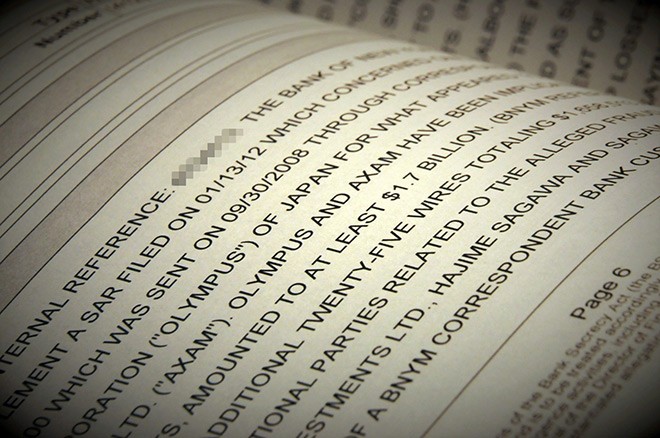 A report submitted to the U.S. Treasury Department by the Bank of New York Mellon shows money transfers between Olympus Corp. in Tokyo and a number of companies based in the Cayman Islands. (Kei Fujiyama)

More than 40 Japanese companies and individuals were mentioned in reports about suspected money laundering and other possible financial crimes.

The International Consortium of Investigative Journalists (ICIJ), in collaboration with BuzzFeed News, The Asahi Shimbun and Kyodo News, has analyzed some of the SARs and related documents collectively called the FinCEN Files.

Some of the Japanese companies contacted by The Asahi Shimbun expressed surprise that their names were mentioned. They explained they did nothing out of the ordinary concerning the transactions.

A major manufacturer of pesticides and insecticides was involved in transactions defined as suspicious, according to one report.

The SAR said that the Japanese manufacturer and another company transferred a total of about $3 million (about 320 million yen at current exchange rates) to a Chinese man’s account at the Hong Kong branch of a British bank between June 19, 2015, and Dec. 30, 2016.

The bank became suspicious because the Chinese man’s personal account was being used for business transactions, and questions were raised about the account information and the source of the funds.

In its report, the British bank also raised the question of what possible business connection could be established between a pesticide manufacturer and a maker of handbags.

However, according to officials of the Japanese company, the pesticide manufacturer had commissioned the Chinese man’s plant from 2004 to produce rubber bands for strapping portable pesticide products around a user’s arm.

Following an inquiry from an Asahi Shimbun reporter, an official working under the company auditor checked the invoices and found that the Chinese plant had delivered products over the 18-month period. The volumes matched the total of $1.68 million transferred to the man’s account, the official said.

Although the pesticide manufacturer said that nothing illegal had occurred, one company official did say it was embarrassing that the money was transferred to the Chinese man’s account because business transactions between companies normally would not involve the bank account of an individual.

The company added that from February 2017, payments were transferred to a company account that the Chinese man established in Hong Kong.

The Chinese man said his personal account in Hong Kong was used instead of the company account because of problems with direct transfers from Japan to accounts in China. The recipients often cannot withdraw the transferred funds, he said.

But he said the situation was different in Hong Kong, which has a long history of international trade so funds can be transferred there from anywhere in the world.

“That was common practice at that time among many plants operating in Shenzhen, and Hong Kong banks were aware of what was going on,” he said. “There was nothing suspicious about the transactions.”

Some SARs cited cases of money being transferred to nations and regions with weak countermeasures against money laundering. Other reports pointed to transactions involving companies whose activities are unclear.

In one case, a Hokkaido trading company that mainly imports coal made suspicious money transfers to a Latvian bank. The company’s name came up in connection with transactions involving a company based in the Russian Far East.

According to a report submitted by a U.S. bank, the Hokkaido company transferred $1,584,880 (about 170 million yen at current rates) on Sept. 24 and 25, 2015, from a Hokkaido bank to an account in the Latvian bank held in the name of a Hong Kong company.

An executive at the Hokkaido company said that when it imported coal from the Russian company, the Hong Kong company was designated as the recipient of payments for the coal.

“At that time, the Russian company explained that (the Hong Kong company) was a subsidiary that served as a liaison,” the executive said.

The SAR said money transfers from a number of companies to the Latvian bank were suspicious “because many of them involve shell-like entities which are banking in the high-risk jurisdiction of Latvia, despite purportedly being located in other countries.”

The report also said many of the entities are “engaging in non-proximate banking.”

The Hokkaido executive said: “We had no sense that we were involved in money laundering. However, we may not have been thorough in confirming the reliability of the recipient company of the funds.”

The U.S. bank involved in the money transfers raised a red flag and submitted a report to the Treasury Department.

The SAR gave a number of reasons for the suspicions, including the greater risk of financial crimes concerning funds transferred to such nations as Latvia, Cyprus and the British Virgin Islands. The report also noted that the Latvian bank’s clients included many shell companies, and suspicious transactions had been discovered in the past.

“At one time, the Russian company designated Cyprus and Switzerland as the destinations for our payments,” the Hokkaido company executive said. “But when a business partner designates where payments should go, we can do nothing but comply. The actual situation is that we have no idea what is going on beyond that point.”

Money transfers related to the shady accounting practices employed at precision machinery manufacturer Olympus Corp. and uncovered in 2011 were also mentioned in SARs included in the FinCEN Files.

The scandal involved the use of entities in a Caribbean tax haven to avoid huge tax liabilities and the oversight of financial authorities.

A report submitted in 2012 by the Bank of New York Mellon, an investment company based in New York, showed 14 transactions between May 2008 and April 2010 involving a total of $1.7 billion transferred among Olympus headquarters in Tokyo, GPA Investments Ltd. and AXAM Investments Ltd., both based in the Cayman Islands, and others.

At that time, Olympus executives falsified financial records to cover up investment losses. But that meant some funds had to be moved out of the company without detection by auditors and tax authorities in Japan and the United States.

Hajime Sagawa, 74, who established AXAM Investments, was eventually found guilty of abetting in the falsifying of financial records.

During questioning by investigators with the Tokyo District Public Prosecutors Office, Sagawa explained that he was worried about tax liabilities.

“We considered that a special purpose company registered in an offshore tax haven should be a recipient for the funds in order to avoid paying taxes. So, I set up AXAM Investments in Cayman in 2007,” he told a prosecutor.

GPA Investments, another tax haven company involved in the transfer of funds, was also used as a “blind” to cover up the flow of funds.

Hisashi Mori, 63, a former vice president at Olympus, told a prosecutor, “It (GPA) was established for use as a defense against the auditing firm and national tax authorities.”

On Sept. 6, 2015, Sagawa told a prosecutor: “We were engaged in a number of transfers of large amounts of money, and some of that involved transactions that had little in the way of economic rationality. Those transfers were made possible because the location was offshore where there was very little in the way of regulation and oversight by the authorities.”

Despite the shady nature of the transactions in which it was involved, the Bank of New York Mellon submitted SARs only after the shady accounting practices at Olympus were uncovered in 2011.

When asked for an explanation by an Asahi Shimbun reporter, the vice president of external communications submitted a written reply that said, “BNY Mellon takes its role in protecting the integrity of the global financial system seriously, including filing Suspicious Activity Reports (SARs).”

According to the U.S. investment bank’s SARs that were included in the FinCEN Files, a total of $1.54 million was transferred through AXAM Investments to Sagawa and his affiliated company.

In October 2014, Olympus filed a lawsuit seeking 500 million yen from Sagawa as compensation for the losses incurred by the company. The court ruled in favor of Olympus in August 2019.

Testimony given by Sagawa and Mori to prosecutors was presented in the lawsuit as evidence, and those documents were seen by an Asahi Shimbun reporter. The ruling was finalized this year in regard to Sagawa after he withdrew his appeal on March 3.