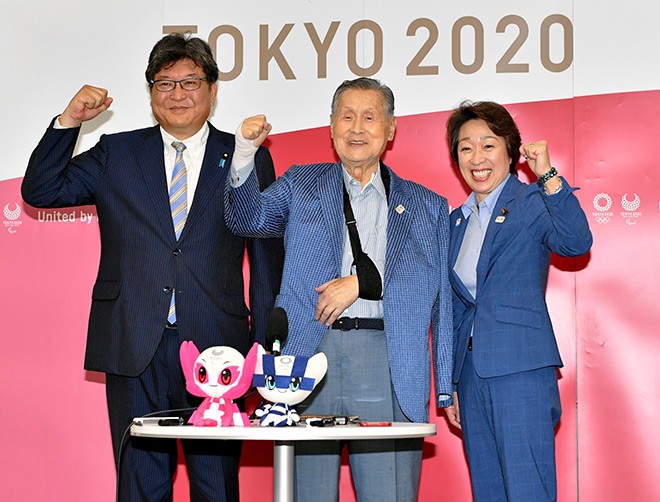 From left: Koichi Hagiuda, education minister, Yoshiro Mori, president of the Tokyo Olympic and Paralympic organizing committee, and Seiko Hashimoto, the state minister in charge of the Tokyo Games, punch the air on Sept. 17 to show their determination to hold the 2020 Tokyo Games. (Pool)

Japan is considering allowing entry to some 10,000 athletes from abroad ahead of the 2020 Tokyo Olympics and Paralympics, set for next summer, the central government revealed on Sept. 23.

Prior to entry, the athletes are expected to be required to submit a certificate that shows they tested negative for the novel coronavirus and a written schedule of their stay in Japan.

The government will also exempt the athletes from self-isolating for two weeks after their arrival to enable them to participate in competitions and practice sessions.

A draft plan for the eased entry restrictions was presented on Sept. 23 at the second coordination meeting by the central and Tokyo metropolitan governments and the 2020 Tokyo Olympic and Paralympic organizing committee.

The three parties will discuss the number of tests needed to be conducted on athletes to check for infections and what to do with those who fail to abide by the rules.

An interim report on the planned eased restrictions will then be compiled by the end of this year.

Athletes coming from outside Japan will need to be tested within 72 hours before leaving the countries where they are staying in order to obtain a COVID-19 negative certificate, according to the draft plan.

The athletes will again be tested at airports immediately after arriving in Japan and must stick to the planned schedules that they are required to submit to Japanese authorities in advance.

The Tokyo Games organizing committee will provide vehicles for those athletes to travel to the athletes’ village after entering the country and shuttle between the village and venues for their competitions and practices.

To ensure that the athletes avoid using public transportation, the municipalities that are registered as host towns or have jurisdiction over other related sites for such athletes will prepare vehicles for when they travel to the athletes' village or venues via such areas.

The draft plan also asks host towns and local governments that have pre-game training camp sites for athletes from abroad in their jurisdictions to draw up manuals on accepting them that take into account what measures will be needed to prevent infections.

Participants in the coordination meeting will also discuss what kind of virus testing is needed and how often it should be conducted in Japan on inbound athletes after hearing experts’ opinions.

The reason is that the accuracy and reliability of tests conducted on athletes before departure in their home countries is liable to vary.

Coordination meeting attendees also plan to ask the athletes to submit a letter of commitment in which they promise to follow their planned schedules and will discuss whether to impose penalties for breaking that promise.

How to deal with athletes from overseas who test positive for the novel coronavirus is also on the agenda.

They confirmed that they will work closely to safely hold the Tokyo Games, according to Seiko Hashimoto, the state minister in charge of the sports extravaganza, who was also present during the call.

Bach also reportedly expressed his willingness to visit Japan in the near future.