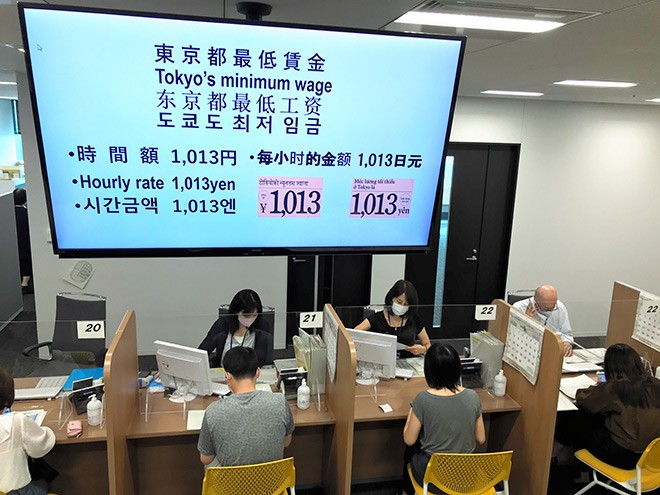 About 100 foreign nationals visit the Foreign Residents Support Center everyday, looking for employment opportunities and work-related information. The center opened in July in Tokyo’s Shinjuku Ward, with the support of eight organizations including the Immigration Services Agency of Japan, the Tokyo Labor Bureau and the Japan Legal Support Center. (Makoto Oda)

Japan’s immigration authorities will step up checks on illegal employment of foreign workers by compiling a database of businesses and schools that have sponsored their visas, according to government officials.

As of the end of October 2019, Japan had about 1.66 million foreign workers, according to the official figures. Those include technical interns who have a work permit and students allowed to take a part-time job for up to 28 hours per week.

The Immigration Services Agency of Japan requires foreign nationals upon entering Japan to submit key documents, such as a job contract or a school admission letter, so officials can verify that they can engage in work and other activities authorized by their visa status.

The agency has so far kept a database of that kind of information on individuals, but not on the organizations employing them.

Critical information, including how many foreign workers are employed by a given company and what type of work they actually engage in, has easily slipped past government scrutiny.

Immigration officials hope to get a more accurate picture of foreign workers’ employment situations and strengthen oversight of the firms and schools accepting foreigners by building an organization-based database.

The agency started building the new database in fiscal 2020 and aims to bring it into use in spring 2022.

About 240,000 firms that are currently hiring foreign nationals--including those with a college degree from Japan or abroad, technical interns and student part-timers--are subject to the agency’s database, along with universities and Japanese language schools.

As of this spring, the agency started requiring businesses and schools to report identification numbers from the residence cards of each foreign national belonging to the organization, in addition to the person’s name and date of birth.

If the database shows that a company hires numerous foreigners holding permits to work as interpreters or engineers--despite the fact that most of the jobs at that company do not require a technical skill--the agency will suspect the company has illegally added staff to engage in an unauthorized activity.

In many cases, companies and schools that accept foreigners will file a visa application on their behalf.

Once the agency suspects an illegal activity when inspecting the application, it will then check applications from the organization more rigorously and conduct an intensive on-site inspection.

One of the factors pushing the agency to cast a more watchful eye on the companies and schools accepting foreign nationals was a series of incidents where foreign technical interns had disappeared from their jobs, likely abandoning them altogether.

Many were forced to work for long hours in poor working conditions and did not get paid for overtime.

The Organization for Technical Intern Training was established in 2017 to oversee supervisory groups and companies that accept foreign trainees. But it did not stop the exodus from those jobs.

In 2019, 8,796 technical interns fled from their employers, according to the government.

The number of migrant workers who come to Japan on a student visa has increased drastically over the years. Many ignore the requirement that students are only allowed to work at a part-time job up to 28 hours per week, and eventually disappear from their schools.

Even worse, more than a few schools in Japan have knowingly admitted those so-called students to generate revenue.

The agency, together with the education ministry, set up new guidelines in 2019 outlining that schools that are sloppily managing their foreign students will no longer be allowed to retain foreign students.

But it is still difficult for the government to know what is really going on at each school.

The Japanese government has focused in recent years on attracting “highly skilled professionals” to come to Japan to work by setting up a new visa category called “Engineer/Specialist in Humanities/International Services.”

The new visa has become a breeding ground for an illegal employment practice, experts said.

There are currently about 260,000 foreign nationals in Japan on this particular visa, which is designed for a person with a college degree from Japan or abroad to work as an interpreter or as an engineer.

But in reality, many visa holders are here doing factory work. Others work as store clerks, in jobs that do not require foreign language skills.

Many legal specialists who deal with issues involving foreign workers describe the visa category as problematic.

“It’s such a phony category,” one said.

Legal experts have pressured the government into conducting a sweeping investigation of the ways the visa is being issued and abused.

Another visa category has driven immigration authorities to speed up the process of building the new database.

In spring 2019, the government created a new category called a “specified skilled worker,” which lets foreign nationals work in 14 industry sectors facing serious labor shortages, such as the construction and hospitality industries.

Those workers are allowed to switch jobs, so long as they are considered to still be working in the same industry.

Lawmakers raised concerns that only urban areas would benefit from the category because foreign workers seek higher-paid jobs in cities and urged the agency to determine the numbers of those visa holders by region.

Officials will be expected to use the new database to check more thoroughly into whether each company assigns a proper and legally authorized task to each visa holder.

When a company hires both technical interns and those on a specified skilled worker visa, it should be easier with the new database for officials to see if the workers are being paid according to their status and check that they are not just lumped together as foreigners.

With the new database, the agency also hopes to simplify the visa application process for “clean” companies and schools that have not raised red flags or violated the rules.

“By focusing more on the oversight for suspicious firms and schools, we should be able to detect illegal practices and reduce the number of those instances,” an agency official said.

A WAY OUT FOR WORKERS

The agency occasionally offers relief for foreign nationals unknowingly involved in an illegal labor practice conducted by a company or a school, allowing them to continue staying in Japan.

Eriko Suzuki, a professor at Kokushikan University, hopes the new database will help reveal that the problem of illegal foreign workers and technical interns fleeing their jobs stems from the companies and schools that are accepting foreign nationals.

Suzuki is urging the government to “establish a system to bail out foreigners who are involved in such illegal activities and let them continue to work and study.”

Experts on labor and immigration issues have long criticized the government’s handling of foreign workers as hypocritical.

In the past 30 years or so, the government has stated that Japan “will not accept unskilled labor from abroad,” even though the lack of manpower has remained a critical and urgent issue for the rapidly aging nation. At the same time, the government has recruited foreigners under the guise of “technical internships” and “study abroad” programs and then let them practice unskilled labor.

For that reason, critics and labor union leaders are urging the agency to use the new database to protect the rights of foreign workers as well.

The Asahi Shimbun is interested in readers’ opinions, feedback and any tips on abuse regarding the Japanese government’s immigration policies and handling of foreign workers. Please send a comment to: keizai@asahi.com