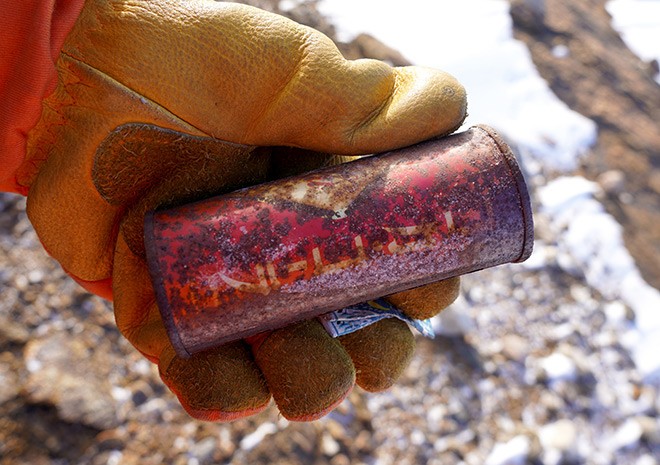 A can of the first generation of Coca-Cola, which went on sale in Japan for the first time in 1965 (Yumi Nakayama)

SYOWA STATION, Antarctica--As if frozen in time, a Japanese research expedition team has discovered a cache of emergency food here from half a century ago, including Japan’s first can of Coca-Cola, chewing gum and canned foods.

The unopened items were discovered on Sept. 3 at the site known as Mukai Rocks, about 8 kilometers from Japan’s Syowa Station.

The location had been used to land in Antarctica after a voyage through the sea ice through the 10th Japanese Antarctic expedition.

The discovery came when four members of the current 61st Japanese research expedition team traveled to Mukai Rocks for observation activities. There were pieces of cardboard around the food, suggesting they arrived in a box.

The National Institute of Polar Research, which dispatches Japanese expeditions, said no records have been left about the food.

Apart from the Coca-Cola and the chewing gum, a can of stewed beef and vegetables, made in February 1965, was found with a label that denoted it as an emergency ration of the Maritime Self-Defense Force.

It was the year when Japan’s Antarctic research resumed with the dispatch of the 7th team.

Syowa Station was closed temporarily after Japan’s first ice breaker, the Soya, was decommissioned. The Fuji, which succeeded Soya in 1965, was operated by the MSDF.

Susumu Kokubun, 85, a former member of the 7th expedition, recalled that Masayoshi Murayama, who headed his team, went to a location near Mukai Rocks in January 1966 on a helicopter that was loaded on the Fuji.

“He may have left the food on that occasion,” Kokubun said.

The can of Coca-Cola came with a label written in katakana and no stay-on tab opening mechanism.

According to Coca-Cola (Japan) Co., it is the design of the company’s first canned Coca-Cola introduced into the Japanese market in 1965. A drinker opens it by making a hole with an opener on top of the can.

The product was available in the market for only one to two years, a company official said, adding that no stock of that particular product is left at the beverage maker.

“It is greatly encouraging to imagine that expedition members had Coca-Cola in the harsh environment,” the official said.

The chewing gum, Cool Mint from Lotte Co., comes in a package featuring a penguin, an iconic creature symbolizing Antarctica.

Lotte said it is the design of Cool Mint when it was first released in 1960.
But it is not just ordinary, everyday chewing gum.

Records by the company and former members of the Japanese expedition teams show that Eizaburo Nishibori, head of the first wintering party, requested in 1956 the confectionery maker develop a special gum for the country's first expedition team prior to its departure for Antarctica.

Lotte presented them with a gum mixed with vitamins and minerals that can be preserved for a year and five months without deteriorating despite traveling through the equator or areas where the temperature drops 50 degrees below zero.

Nishibori’s request led Lotte give birth to Cool Mint in 1960, with its catch phrase “Fresh like in Antarctica.” It was a hit and a long seller.

The company said only one Cool Mint sample from those days is left at Lotte.

“It was a pleasant surprise to know that the chewing gum remained after the passage of many decades,” said a public relations official with the company.

Noriaki Obara, one of the four members of the current expedition who discovered the food, said he was stunned to stumble into the long-forgotten cache.

“I initially suspected that they were things just scattered about,” said Obara, 55. “I feel a special connection with the discovery because I was born in 1965.”