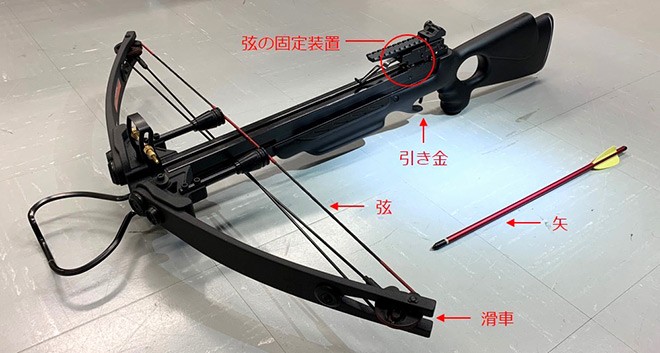 A crossbow (Provided by the National Police Agency)

A National Police Agency panel held its first meeting on Sept. 23 to discuss whether the swords and firearms control law should cover crossbows, the weapon used to kill two people in June.

Agency officials reported that police around Japan have investigated 32 incidents involving crossbows over the past 10 and a half years, including 13 cases of suspected murder, attempted murder or inflicting bodily injury.

Such incidents led to six deaths and 11 injuries.

The panel was also told that 135 calls were made to police departments around Japan about the dangers of crossbows over the same period. It was the NPA’s first compilation of records of calls about the weapon.

Thirty-four of the consultations came from people who were threatened or whose homes were damaged by crossbows.

One caller found a bolt stuck in an exterior home wall. Another individual said her boyfriend sent her an email saying, “You are destined to die,” along with a photo of a crossbow.

Thirty-nine calls were from people concerned about someone they knew who possessed a crossbow.

One caller said a loud neighbor owned a crossbow, making it difficult to complain directly about the noise.

Police said some people have bought crossbows with the intention of killing people, while others simply thought the weapon looked cool.

The agency decided to set up the panel after an attack with a bowgun, a type of crossbow, left two family members dead and two others injured in Takarazuka, Hyogo Prefecture, in June.

A college student related to the victims was arrested.