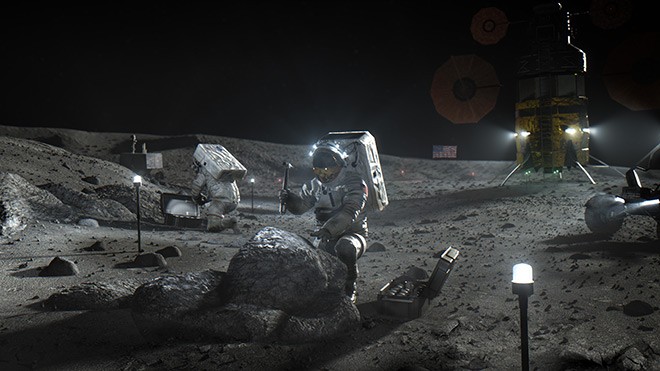 Budget requests like these only come along once in a blue moon.

The science and technology ministry’s budget request for the next fiscal year will include an ask for some 80 billion yen ($760 million) to develop key equipment for a U.S.-led, manned lunar exploration mission.

The ministry, which also oversees sports, culture and education, is aiming to accelerate the development of a new unmanned supply spacecraft, a life-support machine and other related equipment to help enable Japanese astronauts to land on the moon.

As a result of the mission, the annual budget for the Japan Aerospace Exploration Agency is expected to rocket toward a record-high level of 280 billion yen.

The United States plans to have American astronauts land on the moon in or after 2024. Japan decided to join the project in fall last year. Japan’s Basic Plan on Space Policy, which was revised in June, states that the country will ensure that Japanese astronauts have opportunities to make notable achievements.

Because of this, the ministry will make a related budget request of more than six times the size of its overall budget for the current fiscal year.

The cost for developing the HTV-X cargo ship, which would deliver supplies to a new space station planned to orbit the moon, is the highest-priced item, landing at more than 60 billion yen, according to the proposed budget. That in itself is a significant increase from the 7.5 billion yen approved for the current fiscal year.

Other budget earmarks include the costs for developing life-support equipment to be used at living quarters for the space station and Japan’s first unmanned lunar lander, called the Smart Lander for Investigating the Moon (SLIM), which is planned to launch in fiscal 2022.

NASA announced this month that the lunar exploration will require about $28 billion (about 2.9 trillion yen) over the next five years.

Japan is expected to spend some 200 billion yen in developing the supply spacecraft and other related equipment and is likely to develop a moon rover to explore the lunar surface.

Japan also contributes about 30 billion to 40 billion yen annually toward the costs of operating the International Space Station, which will continue its operations for the time being. With the country’s expenditures on manned space activities growing significantly, its budget for scientific investigations and other non-related items will likely shrink.