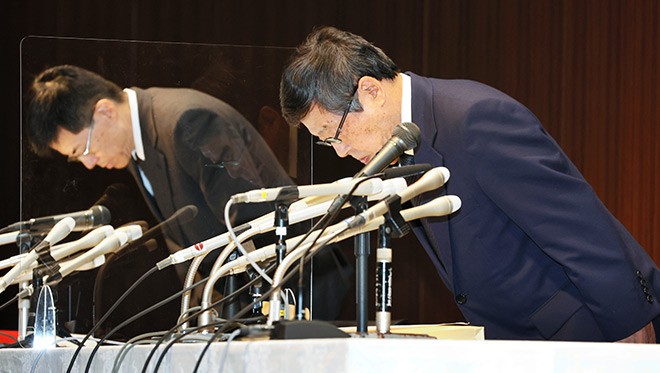 The bank said thieves exploited security weaknesses in electronic payment services to steal the money in 380 or so cases.

In about 100 of those cases, the bank knew about the illicit withdrawals in or before 2019, but it has yet to compensate the account holders.

“I express my deep apology to customers for falling behind in our public announcements regarding the damage and other issues,” Norito Ikeda, the bank’s president, said at a news conference in Tokyo.

Japan Post Bank initially said the damage was 22 million yen in about 130 cases.

But the figures rose after the bank confirmed reports from customers from July 2017 to Sept. 22 this year.

The bank said it has also detected suspicious transactions involving about 600 customer accounts, so the overall loss could be greater.

Officials suspect the perpetrators created fraudulent accounts for various electronic payment services by assuming the identities of bank customers. Funds were then siphoned from the customers’ accounts through transfers to e-payment accounts.

The bank has taken steps to prevent customer bank accounts from being linked to new accounts for multiple e-payment services.

But officials said about 5.5 million customer accounts have already been connected to such e-payment services.

Fearing that many more cases remain undetected, the bank said it will notify customers by email and other methods.

Reimbursements for the 60-million-yen loss will be completed by the end of October, the bank said.

One service called “mijica” that the bank has provided has also been targeted in the e-payment scam. The bank said 54 customers have been affected, and a total of 3.32 million yen has been illicitly withdrawn.