Entire buildings offered to guests in Kyoto during pandemic 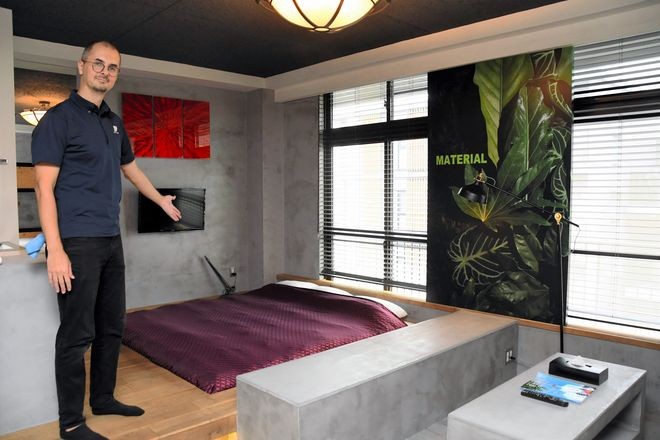 KYOTO--Accommodation facilities have found a way to put up “no vacancy” signs during these tourist-depleted times: Rent out the entire building to one group.

Entry bans, travel restrictions and other precautions against the spread of the novel coronavirus have deprived inns and hotels of their main clientele.

To survive during the pandemic, some operators have come up with unorthodox offers.

Hotel Material in Kyoto’s Higashiyama Ward in June started giving groups exclusive use of all six guest rooms, the dining lounge and the rooftop where they can enjoy barbecue parties and take in a sweeping view of the city.

Hotel Material opened three years ago, and 70 to 80 percent of guests have normally come from outside Japan for the cherry blossom season in spring and the changing foliage in autumn.

But the situation took a devastating turn this year.

“We suspended operations between April and May because of the coronavirus outbreak, generating no sales,” said Jeronimo Gehres, 38, the Brazilian manager of Hotel Material. “We had previously considered an entire building rental service as a means to improve the occupancy rate during off-seasons, and recently brought it into reality.”

Gehres said he became aware that his hotel must “provide a special experience not limited to simply staying” there. He promoted the hotel’s new offer on booking sites that attract many domestic users and updated its website.

Since mid-July, Hotel Material has been fully booked on weekends under the whole building lease program.

The guests are mainly company employees as well as groups of mothers and college students from Kyoto Prefecture and elsewhere in the Kinki region.

Twenty groups comprising nine to 16 people had used the service as of early September, according to Gehres. Satisfied customers said they could “stay without anxiety since there are no strangers.”

The rooftop barbecue site has been popular because guests there can avoid the “three Cs” of closed, crowded and close-contact settings, he said.

“The package takes advantage of the coronavirus-affected circumstance,” Gehres said. “The service will continue even after the pandemic ends.”

Kaede Komuten Co., a Nara-based company that designs and sells custom-built houses in southern Kyoto Prefecture and neighboring Nara Prefecture, is also adapting to the changes caused by the pandemic.

Its new rental lodging facilities in Kizugawa, Kyoto Prefecture, are expected to be used not only as tourist accommodations but also as work spaces and for other purposes, the company said.

Located in corners of residential areas, the two buildings offer first-floor bedrooms and meeting spaces on the second floors.

Groups of eight to 10 people can stay there for a maximum of seven days.

“Consumers can use the entire building so they will never come into contact with other unknown guests,” said a Kaede Komuten official in charge of the service.

“We are seeking a way out of this predicament of having few overseas visitors by stimulating domestic demand among those who want to stay at hotels for work, well-being and pleasure,” the official said.

(This article was compiled from reports by Rikako Takai and Shunsaku Kai.)