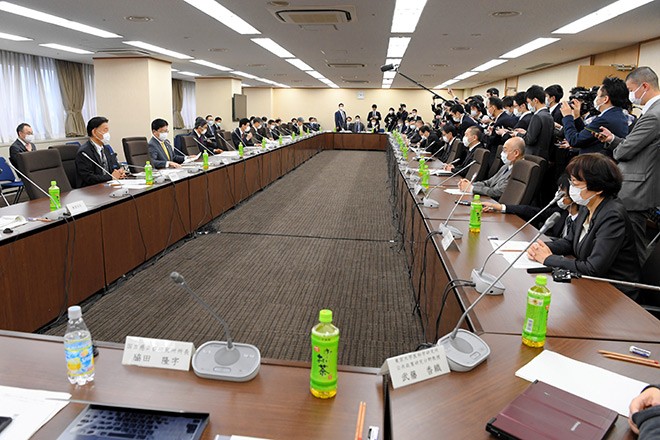 A panel of experts and Cabinet ministers meets on April 7 to discuss whether a state of emergency should be declared in connection with the novel coronavirus pandemic. (Asahi Shimbun file photo)

A panel advising the government on the new coronavirus pandemic never endorsed wording in a draft policy document that would have led to all schools in Japan closing until May 6.

As a result, the government then headed by Prime Minister Shinzo Abe was forced to retract the wording.

Minutes released by the Cabinet Secretariat of the April 16 meeting of an advisory panel of experts set up by the government to chart a basic direction in dealing with the health crisis show that a number of panel members objected to the inclusion of wording “based on the view of the panel of experts that it was preferable to have all schools close their doors until May 6.”

The main item on the April 16 agenda was whether to expand the state of emergency over the pandemic nationwide.

According to the minutes, an official with the secretariat of the advisory panel raised what was described as a proposal made by the education ministry.

The official presented the draft wording and suggested it be included in the policy direction for dealing with the COVID-19 pandemic along with additional wording that the government would work along the lines laid out in the draft wording.

One problem was that the panel of experts never compiled a view on having all schools close their doors.

A director-general with the health ministry wanted to know when the panel of experts had laid out its view as presented in the draft wording.

The panel secretariat then suggested revising the “panel of experts” to just “experts.”

But panel member, Nobuhiko Okabe, director-general of the Kawasaki City Institute for Public Health, pointed out that if a panel of experts had in fact made such a point that should be clearly spelled out.

Another panel member, Hitoshi Oshitani, a professor of virology at Tohoku University, said, “It is the central government that should be making such decisions.”

Yasutoshi Nishimura, the state minister in charge of economic revitalization who is also point man for the government in dealing with the COVID-19, said asking all schools to close at once was one alternative since that would prevent gaps from appearing in progress made in studies between schools that close and those that remain open.

The minutes show Nishimura asking the panel, “Is it better to close schools or not?”

Yoshihiro Kawaoka, a virology professor at the University of Tokyo’s Institute of Medical Science, said, “closing all schools because inequalities might arise is not in line with the objective of controlling the infection.”

Kaori Muto, a professor of medical sociology at the same University of Tokyo institute, said “even under a situation when infections are spreading, there should be protection of the right of children to an education.”

Shigeru Omi, the panel chairman, pointed to the difference between the 13 prefectures then under a special caution and required to take extra measures to deal with COVID-19 and the remaining 34 that were not.

He said it would “be difficult for the panel of experts” to ask those 34 prefectures to close all their schools.

Omi added, “If experts allowed this to go through, the question would then be just what is (the government) doing.” That led the central government to withdraw the draft proposal.