Lisa’s In and Around Tokyo: Aoyama Cemetery--Rest assured, you’d be envied for eons 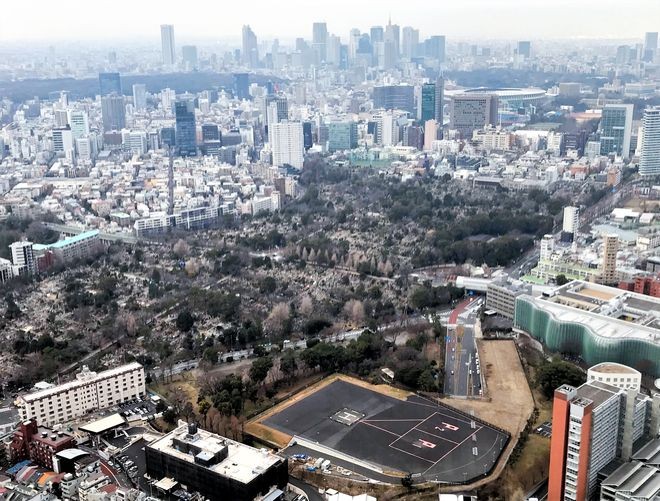 Established and run by the Tokyo metropolitan government, Aoyama Cemetery is located in the chic neighborhood of Aoyama in Minato Ward. (Asahi Shimbun file photo)

Nothing is stirring, not even a mouse. It’s “ushimitsudoki,” the third quarter of the ox hour--between 2 and 2:30 a.m., in the dead of night.

Out of nowhere, “Hyuuu-dorodoro ...” The sound reaches a crescendo, and then, before your eyes appears a thin woman with disheveled hair in a white robe. Her outstretched hands dangle lifelessly from her wrists, and her feetless body seems to float.

You take a few steps back and trip on something, or your knees give out. You land on your bum and scream, “Aughhhhhhhhh!”

I gave that Japanese sound effect some thought and realized that the “hyuuu” part must be a flute and the “dorodoro” a drum. Maybe it comes from theater--the first part somehow conjuring up the image of a figure appearing out of the ethers, and the drum a person’s heartbeat?

Aoyama Cemetery is situated on prime real estate, a stone’s throw from chic Minami-Aoyama, gorgeous Jingu Gaien Ginkgo Avenue and the Kisho Kurokawa-designed National Art Center. Contrary to the spooky image that burial grounds often bring to mind, this garden of remembrance is tranquil and perfect for a meditative stroll.

Until the end of the Edo Period (1603-1867), funerals and burials were officiated by local Buddhist temples under the auspices of the Tokugawa Shogunate. Those with means chose as their final resting ground a graveyard on temple precincts.

With the 1868 Meiji Restoration came liberalization, and Japan’s first public cemetery was set up on land confiscated from the Aoyama family of the Gujo clan in current Gifu Prefecture.

It’s an amazing coincidence that the kanji for Aoyama is also read “seizan,” which refers to final burying grounds. People came from all over Japan and the world, and when they passed away, they were laid to rest in a peaceful place in the middle of the great metropolis.

Of the 14,000 tombstones in the cemetery, the most celebrated might be a faithful Akita dog whose likeness adorns a corner of Shibuya crossing. Hachiko lies alongside his master, agricultural scientist and professor Hidesaburo Ueno, and his partner, Yaeko.

I wondered if it would be possible to secure a plot here as my last home and did some figurative digging. It turns out, yes! As of July this year, there were 54 sites available (by lot) with a price tag ranging from 4.5 million to 10 million yen ($42,700 to $94,900) each. Not a ghostly, I mean, ghastly figure for a covetable address.

This article by Lisa Vogt, a Washington-born and Tokyo-based photographer, originally appeared in the Aug. 23 issue of Asahi Weekly. It is part of the series "Lisa’s In and Around Tokyo," which depicts the capital and its surroundings through the perspective of the author, a professor at Meiji University.