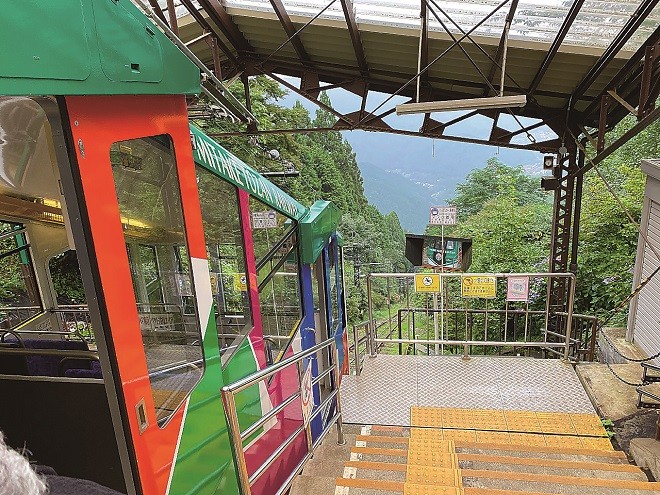 The Mount Mitake cable car is the steepest funicular line in the Kanto area and it takes visitors up the mountain in about 6 minutes. (Photo by Lisa Vogt)

I parked my car, got out and went around to the passenger side to help my 90-year-old mother out of the vehicle.

I drive an SUV that sits up high, so it takes an extra couple of seconds for her to get in and out. Despite numerous mishaps, my dear mother walks fine without a cane, albeit slowly.

We were thrilled to finally visit Mount Mitake, a sacred mountain in western Tokyo. All smiles and snapping photos, we got on the Mount Mitake Tozan Railway cable car at Takimoto Station.

The incredibly steep railway inches up a slope for six minutes at a maximum 25-degree angle. Wowing and having a merry time, we reached the top, and the doors opened. Whoa--there was no platform!

The cable car stops along concrete steps that looked steep. Our eyes met and she looked a bit apprehensive, but said, “OK, let’s do it!”

Hand in hand, we slowly conquered each step, aiming to reach the ticket gate at the top. My mother was sweating and panting, but we were making progress. Then, from the top of the steps, an impatient railway staff yelled, “Hurry up!”

My first reaction was disbelief. Can’t the guy see that we’re doing our best? The cable car runs once every 30 minutes, and we’re not holding people back. Disheartened, my mother said that she would forsake the rest of the steps. She turned back and boarded the cable car to wait for its scheduled descent.

Atop the mountain is Musashi-Mitakejinja shrine. It was said to be built in 91 B.C. and is known for an ancient divination method called "rokuboku" or "futomani," which involves the reading of cracks in a heated deer’s bone.

Such foretelling events are in the "Kojiki" and "Nihon Shoki," and archeological records show that people in the Jomon and Yayoi periods (14,500 B.C.–250 A.D.) engaged in such affairs.

In this aged practice of divination, "kotodama," the conviction that words have within them mystical powers that shape and affect living things and objects, is central. Sounds are vibrations that create all that we can perceive, making it the source of all there is.

Mount Mitake--what a genuinely spiritual mountain! Without my even having reached the summit (I guess it wasn’t necessary for me at this time), with the station attendant’s kotodama, my spirit was shaken, and I could reaffirm that words resound, spread and create outcomes that are real indeed.

This article by Lisa Vogt, a Washington-born and Tokyo-based photographer, originally appeared in the Sept. 6 issue of Asahi Weekly. It is part of the series "Lisa’s In and Around Tokyo," which depicts the capital and its surroundings through the perspective of the author, a professor at Meiji University.