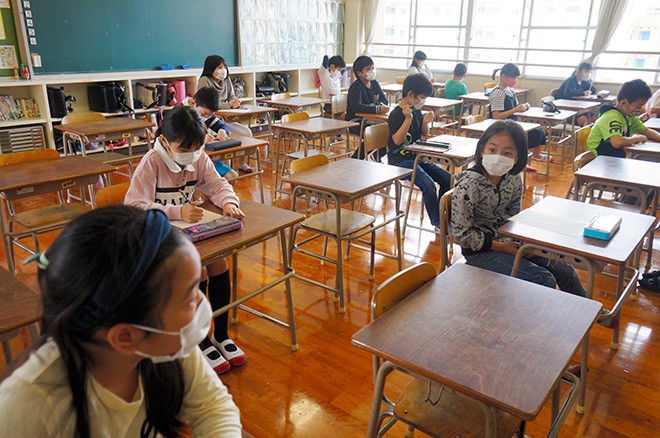 Pupils are seated at a distance from each other at an elementary school in Fukuoka in May. The class was divided into two rooms to prevent the spread of novel coronavirus infections. (Asahi Shimbun file photo)

About 90 percent of teachers and school staff are seeing more students struggling to maintain their physical and mental health amid the COVID-19 pandemic, according to an online survey.

The survey also found that around 90 percent of the respondents expect a rise in bullying cases and a widening gap in academic skills among students after the prolonged school closures.

Kyoiku no Mori, a Tokyo-based nonprofit organization that calls for educational reform, surveyed teachers and school staff at public, private and national schools mainly in the seven prefectures that first came under the state of emergency to contain the virus.

In Japan, the academic year usually starts in April, but many schools nationwide were closed in spring at the government’s request to curb the spread of infections.

The government also issued a state of emergency for Tokyo, Osaka and five other prefectures in early April and later extended it to the entire nation.

Respondents were given four choices, from “strongly agree” to “strongly disagree,” for each question in the survey.

On the question of whether “bullying will likely increase,” 89 percent chose either “strongly agree” or “somewhat agree.”

The survey, which covered teachers and school staff at elementary, junior high and high schools and special needs schools, also asked teachers about their work style.

Among teachers and “shukan-kyoyu” senior teachers whose duties include assisting principals and vice principals at the public schools in the seven prefectures, 490, or 60 percent, said their overtime hours exceeded the upper limit of 45 hours a month set by the education ministry.

Respondents were also asked to rate, on a four-point scale, the level of burden put on them from each anti-virus measure.

Ninety percent chose “considerably” or “somewhat” for the measure of “disinfecting school buildings,” while 89 percent made the same picks for “instructing students to maintain social distancing.”

“Dealing with students’ anxiety” was putting a considerable or somewhat of a burden on 81 percent of the respondents.

Kyoiku no Mori, headed by Shinji Fujikawa, compiled a list of emergency recommendations based on the survey results and handed it to a ministry official.

In the recommendations, the organization asked the ministry to lower the maximum number of students in a classroom to 20.