EDITORIAL: Living with risk of eruptions and finding ways for people to be safe 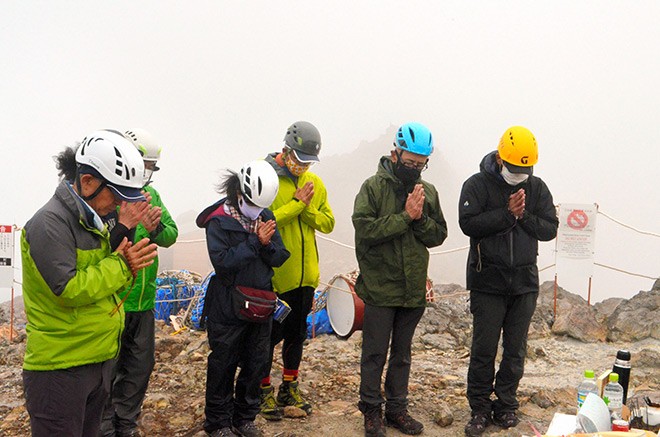 Families of victims and missing climbers of 2014 Mount Ontake eruption observe a moment of silence near the center of eruption site in Otaki, Nagano Prefecture, in July. (Asahi Shimbun file photo)

Six years ago, on Sept. 27, 2014, Mount Ontake in central Japan abruptly erupted, leaving 63 people dead or missing. The eruption occurred on a sunny Saturday when many climbers were near the 3,067-meter peak straddling Nagano and Gifu prefectures.

The nation's deadliest postwar volcanic disaster prompted the Japan Meteorological Agency to beef up its nationwide network of observatories to monitor volcanic activities. Still, it is a tall order to accurately predict volcanic eruptions due to limits in current knowledge and technology.

With 111 known active volcanoes, Japan is one of the most volcanic countries in the world.

Mount Ontake erupted without clear warning while the Volcanic Alert Level for the mountain was at its lowest 1-point level on a five-point scale.

Families of some victims sued the government for damages, asserting it was liable for the JMA’s failure to raise the level of alert despite the frequency of volcanic earthquakes prior to the eruption.

After the disaster, the number of volcanoes monitored around the clock as the agency’s priority surveillance targets was increased to 50. More monitoring cameras and seismometers were installed.

The agency needs to make effective use of its enhanced monitoring capabilities to detect signs of increased volcanic activities and swiftly provide such information to the local communities concerned. It is also vital to take steps to prepare for sudden, unpredictable eruptions and raise public awareness of the risk.

A 2015 revision to the active volcano law mandates 190 municipalities around the volcanoes under the agency’s 24-hour monitoring to develop systems to convey information to local communities as well as plans for emergency evacuation during eruptions. But only 70 percent of them have finished the work so far. The remaining 30 percent need to expedite their efforts to ensure local communities are better prepared for such eventualities.

Volcanic eruptions trigger all sorts of hazards, including pyroclastic flows, or dense, fast-moving flows of solidified lava, volcanic ash and hot gases, as well as streams of lava and volcanic cinders. Falling volcanic ash, in particular, can cause far-reaching damage.

In March, a working committee of the government’s Central Disaster Management Council released its estimates of what would happen in the Tokyo metropolitan area if Mount Fuji erupted on a scale of the famous Hoei eruption in 1707, the last time the sacred peak blew its top. The panel focused on the damage that would be caused by volcanic ash.

In a worst-case scenario, huge amounts of volcanic ash would be carried toward Tokyo by west-southwest winds and fall on central parts of the capital as well as seven prefectures, according to the panel. The total amount of ash would be about 10 times greater than the volume of waste generated by the 2011 earthquake and tsunami disaster.

The panel warned that the Tokyo metropolitan area’s infrastructure would effectively cease to function, with railway services unable to function and roads rendered unusable.

A vast number of issues need to be considered. One is whether local residents should be urged to move to evacuation centers or they should be advised to stay home and wait for relief supplies. How would relief supplies be distributed to households?

Other key challenges, including supporting medical institutions, securing ash disposal sites and establishing systems to take over the functions of the capital, also demand all-out efforts by the government.

Similar policy efforts are also required, to varying degrees, with regard to hazards posed by other volcanoes in this country.

We need to focus on finding ways to live with them safely through better monitoring and observation of high-risk volcanoes that have diverse characteristics.