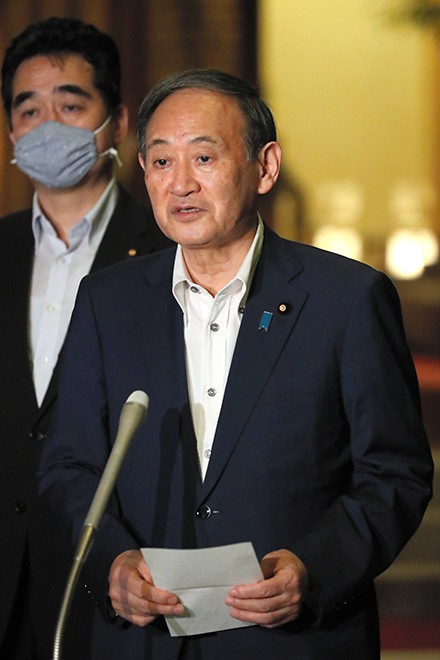 Yoshihide Suga continued making the diplomatic rounds as Japan's new prime minister on Sept. 25 with a phone call to Chinese President Xi Jinping, during which the two leaders confirmed the importance of working closely on issues affecting the two nations and the international community.

During the conversation lasting about 30 minutes, Suga voiced his concern about frequent intrusions by Chinese Coast Guard ships into Japanese territorial waters off the disputed Senkaku Islands in the East China Sea.

After the call ended, Suga told reporters, “We agreed to work closely together on various issues affecting our two nations, this region as well as in the international community through various high-level talks, including among the top leaders.”

According to government officials who briefed reporters, the two leaders agreed to continue discussions on ways to tackle the novel coronavirus pandemic as well as to open the door for a resumption of mutual visits by business travelers.

They also agreed to coordinate on ways to resolve the longstanding issue of abductions of Japanese nationals by North Korea.

In addition to raising concerns about incursions by Chinese ships around the uninhabited Senkaku Islands, Suga told Xi he wanted at some point to hold talks about the state security maintenance law recently implemented by Beijing for free-wheeling Hong Kong.

Suga told reporters that no specific mention was made of a state visit to Japan by Xi that was initially scheduled for April, but postponed due to the pandemic.

Suga has pledged to continue the diplomatic direction of his predecessor, Shinzo Abe, and work to improve economic ties with China.

Some within the ruling Liberal Democratic Party, including Secretary-General Toshihiro Nikai, who maintains close ties with Chinese officials, have called for an early rescheduling of a state visit by Xi.

However, more rightist elements within the party are continuing to raise objections, with the most recent move being the submittal of a request to Deputy Chief Cabinet Secretary Naoki Okada on Sept. 25 by a group of conservative LDP lawmakers asking that the state visit be canceled outright.

Asked during his Sept. 25 news conference about the prospects of a state visit by Xi, Chief Cabinet Secretary Katsunobu Kato said, “We are not at the stage right now of coordinating specific dates for such a visit.”

The phone conference, requested by the Japanese side, was only the second instance for Xi to talk to a Japanese leader. His only other phone meeting was with Abe in May 2018.

Chinese diplomatic sources, as well as those within the Chinese Communist Party, said Xi likely agreed to the phone conference because Beijing wanted to assess where Suga stands in relation to ties with China.

When Abe abruptly announced in late August that he was stepping down for health reasons, the Chinese government issued a statement praising him for his efforts to put bilateral relations on a new footing.

While Chinese officials expressed their hope that Suga would continue with that course, one diplomatic source said, “We have not sufficiently analyzed what Suga’s true intentions are.”

One point that irritated Chinese officials was a Sept. 18 meeting between former Prime Minister Yoshiro Mori and Taiwan's president, Tsai Ing-wen, in Taipei.

Mori told Tsai that Suga was prepared to hold a phone conference with her as well.

At his Sept. 23 news conference, Kato said, ”There are no plans” for such a phone conference.

One point of interest is the extent to which Japan will cooperate in China’s Belt and Road Initiative.

“We have reached the stage of seeking specific results from Japan,” said a Chinese Communist Party source. “We need to determine how serious Suga is about cooperating.”

China views a Xi state visit to Japan as an important step toward gaining greater cooperation.

However, the rise in intrusions into Japanese territorial waters has created a backlash in Japan.

Beijing has apparently not taken the state visit off the table because the Xi leadership has clearly separated its principled stance on sovereignty from issues concerning foreign affairs and economic relations.

According to Communist Party sources, the change in Japanese leadership has led to a reassessment of issues that must be cleared before a Xi state visit becomes a reality.

A consensus has been reached that the conditions that must be in place for such a state visit are bringing the new coronavirus pandemic under control, creating an atmosphere in which the peoples of the two nations would welcome such a visit and having the Suga administration become a stable, long-term one.

Although Beijing is concerned about Japanese public opinion in connection with Hong Kong, one diplomatic source said: “The ball is now on Japan’s side. If Suga is really serious, a visit by Xi in the first half of next year might be possible.”

(This article was written by Ryutaro Abe and Naoki Kikuchi in Tokyo and Takashi Funakoshi in Beijing.)